“This is a nice, lightly used loop that connects to the Mueller State Park trail system with good views of Pikes Peak. ” Dogs, camping, and fires are prohibited in the Dome Rock State Wildlife Area.

This is basically a four-mile loop that changes elevation on the north and south ends. The views are limited to the west side of the trail. The remaining portions are in a valley or in the trees.

There are no obstructions or creeks to cross. There were cattle grazing in this area in 2017, and would sometimes be on the trail. Running counterclockwise will give you the longest climb.

The loop starts at the Dome Rock State Wildlife Area trailhead located in the northeast corner of Colorado Mountain Estates. Approximately 250 yards down the Parking Connector, you'll come to a fork. Keep to the right if running the loop counterclockwise (the easiest way), and head up the hill. The trail has little in the way of signage until you get several miles in, but according to the map at the trailhead, you are on Black Bear Trail. Through the trees to the left (east) you'll get some very nice views of Pikes Peak and Sentinel Point.

Around 0.8 miles in, you'll start to dump elevation fairly rapidly, which is why this is the easier direction. At around 1.25 miles, you'll finally bottom out near a couple of barns and an old corral. The large red barn is used for equipment storage by the State, but the little barn and corral look like they haven't seen use in a while. Just past the barns, you need to take the fork to the left and start on Werley Ranch Trail. Otherwise, the trail will take you down to Hay Creek and a meadow just down the hill.

Now the trail stays fairly level for the next 0.75 miles or so. You'll be running along Hay Creek, which flows through a nice quiet valley, where, depending on the time of year, you could spot deer or elk. Eventually, at around the 2.2-mile mark, you'll come to another fork and a rare glimpse of signage.

The first sign will tell you that you were on Werley Ranch Trail. The next sign will advise you that the left fork will begin North Hay Creek Trail, whereas the main trail to the right (Hay Creek Trail) eventually enters Mueller State Park. Take the left branch and continue on for approximately 0.25 miles. Once again, there will be a fork in the trail. Take the left fork and stay on North Hay Creek Trail (a right, once again, will eventually enter Mueller State Park via the Golden Eagle Trail #14).

Now it's time to pay for the steep descent you enjoyed earlier. For the next 0.75 miles it's a steady, although very manageable, climb back up to Black Bear Trail. Around 0.5 miles up, you'll see the remains of another old corral on the right (north) side of the trail. Once at the top, you have your last chance to venture into Mueller State Park with a right on Black Bear Trail. Otherwise, take the left fork and enjoy the last 0.7-mile leg back to the trailhead.

It's all pine and aspens along the trail. A lot of scat from small predators can also be found. 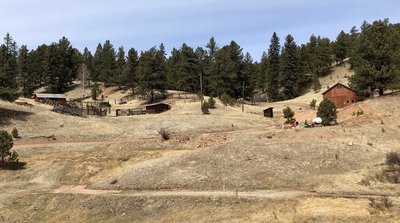 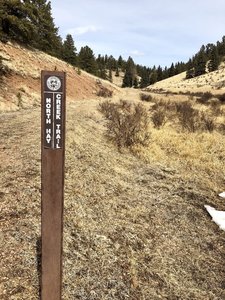 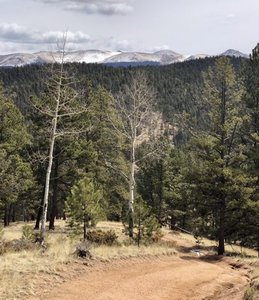 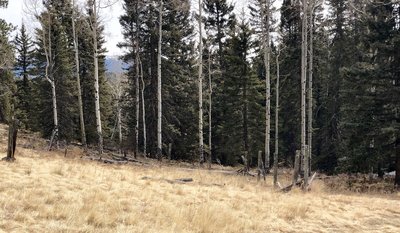 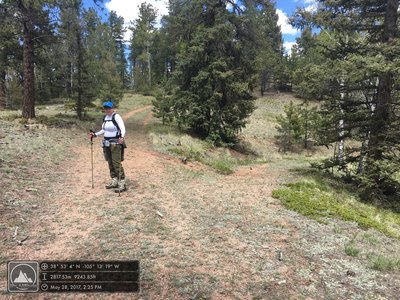 Garden of the Gods Loop