“A difficult run to the second highest ranked peak in the Pikes Peak Region. ”

Sentinel Point is a difficult, lightly trafficked 7.7 mile loop run between Divide and Cripple Creek, CO. This trail will take you to the summit of the second highest mountain in the Pikes Peak region next to Pikes Peak itself. This peak is so named because it stands like a sentinel on the western end of the Pikes Peak massif and climbs several thousand feet of elevation above the popular Horsethief Park.

Make sure to bring ample hydration and calories. There are no restrooms or facilities anywhere along this route.

Trekking poles and traction would be good things to carry with you on this run regardless of season. Snowshoes are likely required in winter. Runners may also wish to bring gloves for rock scrambling sections as the Pikes Peak granite here is very sharp. GPS highly recommended due to lack of clearly marked sections.

Directions: From Colorado Springs, take Highway 24 west through Woodland Park to Divide. In Divide, at the stop light, turn left onto Highway 67 toward Cripple Creek. Drive approximately 8 miles until you see the old Midland Railway tunnel. The trailhead is on the Cripple Creek side of the tunnel.

Begin your run on Horsethief Falls Trail (#704AA). You'll proceed approximately a mile uphill until you reach a marker for the Ring the Peak Trail. Here, proceed left onto Horsethief Park Trail (#704). This section is mostly flat and winds through meadows with beaver ponds and aspen groves. This would be a great spot to camp and the area is so named because it was camp to horse thieves and rustlers during the height of the Cripple Creek gold boom.

When you come to a Y in the trail, keep right onto Horsethief Park Trail (#704C) and this trail will soon meet up with the Oil Creek stream bed and begin gaining elevation. Watch for the numerous cairns in this section and proceed until you reach a large boulder field. At the boulder field, you'll find numerous cairned routes, however, the easiest route seems to be to skirt the field to the left. Proceed through this boulder field and you'll soon reach tree line. Continue to proceed up the mountain following the cairns until you crest the ridge line and the summit of Sentinel Point comes into view. The summit requires class 3 rock scrambling.

From the summit, runners may backtrack the route they came which is much more clearly marked and seems to be less steep. This route does continue in a loop down to Horsethief Falls, however, the southern part of the loop is completely unmarked (no tape, no cairns, nada) and you'll need to rely heavily on GPS for route finding. This may be something to consider depending on your individual equipment and comfort level when deciding on whether to attempt this section of the route. Know your limits and don't risk getting lost in the woods when there is an easier way back!

To follow the route as mapped, make your way off the summit and proceed south along the ridgeline until you find a saddle and an opening in the rock face that will be to your right. This will be where you begin your descent. The descent is very steep and trekking poles may be desired. Also this hiker ran into one section of class 3 down climbing that was required in one section sticking closely to the GPS track I had, however, your milage may vary.

Continue downward until you run into a stream near the bottom of the valley. A short, unnamed trail will appear that follows alongside the stream which will lead you to Horsethief Falls and eventually link back up with Horsethief Falls Trail (#704AA) and return you to the trailhead.

This area is named Horsethief Park because it once played sanctuary to horse thieves and rustlers during the gold boom days of Cripple Creek. 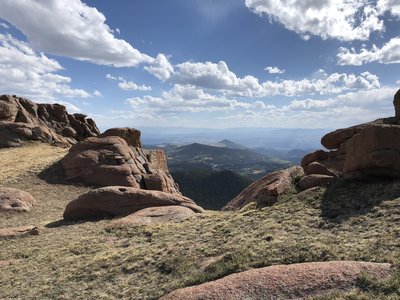 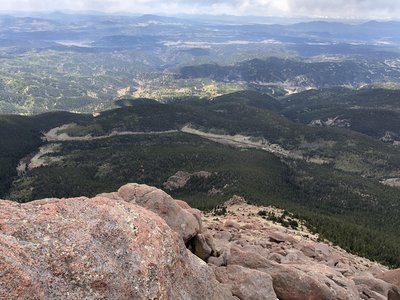 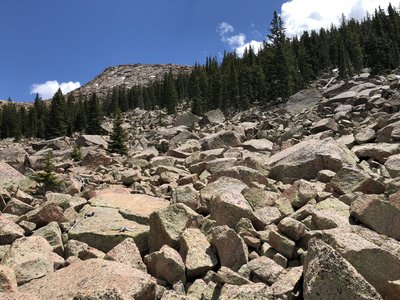 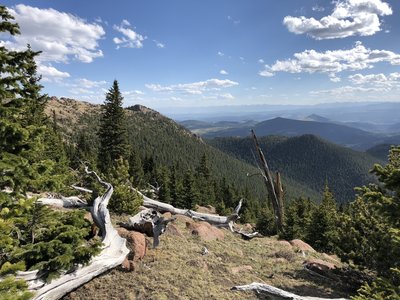 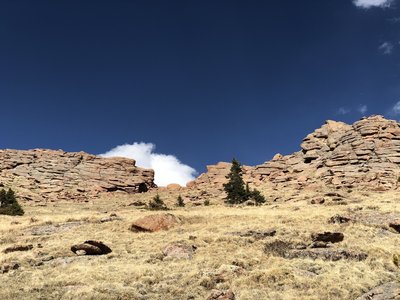 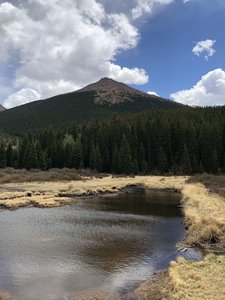