“Run from Agnew Lake past the beautiful Clark Lakes and over a low ridge to connect with PCT. ”

Overnight trips require a wilderness permit. Spooky Meadow shares trailhead and quota with Rush Creek: reserved 18, walk-in 12 (total 30). Make reservations well in advance at: recreation.gov. Select Inyo National Forest Wilderness permits. Walk-in permits issued starting at 11:00 AM the day before your trip. They can be obtained at the Mammoth Lakes Visitor Center or the Mono Basin Visitor Center in Lee Vining. Walk-in permits are free. Reservations are $10. No permit required for day runs.

The Spooky Meadow Trail branches off of the Rush Creek Trail shortly before that trail reaches the Agnew Lake dam. It goes through a dam service area and then crosses Rush Creek on a wide, newly constructed bridge. The trail is easy to follow, but in early August 2019, it was overgrown almost wherever it passed near brushes. This was annoying, but the overgrown branches were small and easily pushed aside. The trail has some minor ups and downs over the first 0.6 miles as it passes around the south side of the lake.

The next 1.5 miles are a very steep,1,400-foot climb out of the Rush Creek and Spooky Meadow canyons.This section is not for those with acrophobia. The trail crosses and switchbacks up extremely steep rock slides of stones varying from small rocks to boulder size. When viewed from the Rush Creek Trail, it looks pretty scary, but it is not that bad when you are actually on it. The trail is reasonably wide, and it is not really dangerous as long as you pay attention.

The trail crosses a creek at Spooky Meadows, where there is a least one good campsite. It quickly climbs high above the meadows to cross a broad ridge. Near the top, there are views back of the northern part of the June Lake loop, Mono Lake, and beyond.

From this point on, the trail is easy. Drop about 100 feet to the highest Clark Lake and then another 100 feet to the largest. Both are grassy, but beautiful. They are surrounded by red rocky cliffs and have good fishing. Cross the junction of the Clark Lakes Trail at the north end of largest lake. That trail, which branches off from the Rush Creek Trail on the west side of Gem Lake, is a longer, but much less steep way to reach here. It continues around the east side of the lake and on to Summit Lake and then drops down to the PCT.

The Spooky Meadow Trail continues around the west side of the lake where there are good campsites. It passes 3 more small Clark Lakes and then climbs about 100 feet over a low ridge. From there, the trail drops down 300 feet to the PCT about 1.8 miles from Thousand Island Lake. On the way, it passes a breathtaking viewpoint that looks down the San Joaquin Canyon towards the Mammoth Crest and Silver Divide, with the Ritter Range on one side and San Joaquin Mountain on the other. 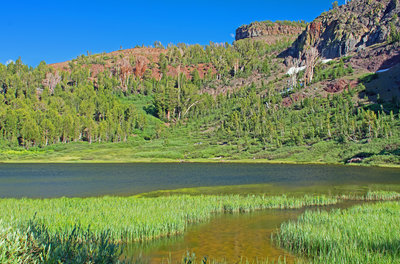