“Don't let the name scare you off, this is a fun trail with a great view of the Blue Ridge. ”

The Virginia Highlands Horse Trail runs 67 miles through the heart of the Blue Ridge Mountains in the Mount Rogers National Recreation Area. Some sections are open to bikes, including this one, So be aware of your surroundings and other users on the trail.

This segment of the VHHT is pretty rockier sections but very navigable. You can also expect a dozen or so short water crossings including several sections where water runs down the trail. As mentioned previously, the trail is quite rocky, so erosion is minimal.

It goes without saying that as this is the Virginia Highlands HORSE trail, so you should expect to see horses and follow the appropriate etiquette. Unfortunately, you can expect a fair amount of horse poo.

From the Scales Horse Corral, the VHHT continues towards the Wilson Creek Trail. Wilson Creek Trail takes you to Grayson Highlands State Park. At about the four-mile mark, veer right (don't go through the gate) and shortly thereafter you'll reach a junction with the Appalachian Trail and the Rhododendron Gap Trail.

Much of the trail is pretty well covered in shade, but there is an impressive view at this junction. From this junction, continue straight on the VHHT which narrows significantly. After another mile, you'll have to take a sharp right to stay on the VHHT. The Cabin Ridge Trail continues straight at this point, but it is closed to bikes because it passes through wilderness. The VHHT continues another mile to the intersection with the Crest Trail in the middle of a large clearing with Mount Rogers directly in front of you. The vegetation in this section has almost formed a tunnel through which you must run, and of course there are the omnipresent rocks to contend with. You'll have to take the Crest Trail because the next segment of the VHHT continues into a designated wilderness. 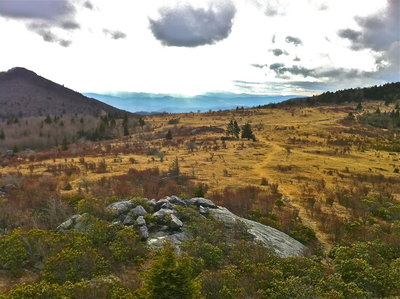 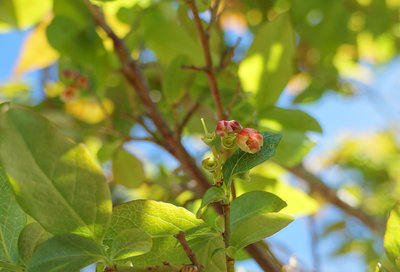