“A nice loop trail through the marsh and into upland forests with boardwalks and outlooks. ”

The trail is closed during deer rifle season: 2nd Saturday to the 4th Sunday in November.

The Stephen J. Young Marsh Trail is about a one-mile loop. It begins and ends at the Stephen Young Marsh, and loops through the deciduous woods above the marsh. The trail begins across Tabor Road from the parking lot, but it’s a good idea to scan the marsh before crossing the road.

Waterfowl are common in early spring, and later in the spring and summer, Green Herons can often be seen perched on the snags. Proceed across the road and take the trail to the right. Swamp Sparrows are abundant in this area. As you approach the dam at the north end of the marsh, watch for waterfowl and American Bittern. Proceed uphill to the woods. As you approach the pool on the left, check for ducks and Green Herons. Proceed to the boardwalk, where Northern Waterthrush and other warblers may be found. Beyond the boardwalk, Ruffed Grouse, Wild Turkeys, Brown Creepers, and Golden-crowned Kinglets are sometimes found.

At the clearing at the top of the hill, Eastern Towhees have been seen in recent years. As you continue through the woods ahead, watch and listen for Barred Owls, especially in late winter and early spring. Pileated Woodpeckers are common. The trail eventually drops back down to the marsh, passes a former sugarhouse (now a refuge storage building), and continues to an observation platform that extends into the marsh. Tree Swallows are abundant, using both the nest boxes and natural cavities in the snags for nesting. The trail then returns to its starting point. 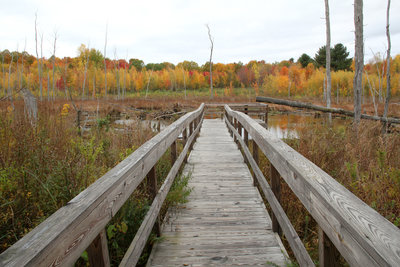 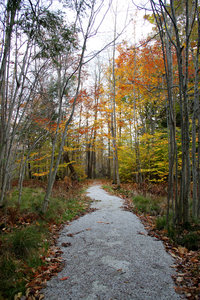