“A route with beautiful views, diverse ecosystems, and challenging singletrack climbs and descents. ”

This run, along the St. John Trail Race course from Cruz Bay to Coral Bay, follows a renowned series of National Park trails that traverse peaks, ridges, ravines, and beaches across the entire island.

Dropping down into the Reef Bay Trail from the end of the Seiban Road Jeep Trail after the cactus keep left, not right, at a T junction to drop into Reef Bay. When climbing the Reef Bay Trail after the sign for the Petroglyphs, you run in a creek bed for a while but a small "Trail" sign leads you out of it to the right. That sign is sometime easy to miss, leaving you scrambling up rocks to the left of the actual trail.

In previous years this was a race, however it has been canceled for 2018. There are informal group runs on February 19 and April 15th, 2018. You can find more information here: stjohntrailrace.com

There is no cell service or car access at the bottom of the Reef Bay Trail so that's the worst spot to turn an ankle. They can land a boat on the beach though for emergencies. That's how the one-way runners on the Reef Bay Trail return to Cruz Bay on NPS tours.

This run features three 800-foot ascents from beach to hill starting with the climb out of Cruz Bay to Caneel Hill with stunning views at the lookout. It follows the ridgeline to Margaret Hill then drops down to the Catchment Trailhead. From there, a 1.3-mile stretch of Centerline Road is used to get to the L'Esperance or Seiban Road Jeep Trail which takes you down along the Fish Bay Gut then across to Reef Bay. The lush vegetation of the Fish Bay gut slowly changes to dry forest and the wide jeep trail narrows to singletrack on a cliff edge with great views.

Trees give way to cacti in the steep descent to Reef Bay. Climb the gentle trail out of Reef Bay (Reef Bay Trail) along with the soldier crabs. The trail follows switchbacks around sugar plantation ruins and only gets very steep near the top as you reach Centerline Road. Cross over Centerline, and to the far right is an unmarked entrance to the Maria Hope Trail which carries you steeply down to Maho Bay.

Run along Maho Bay Beach and then get back on the road that takes you to the Annaberg Plantation and the Leinster Bay Trail. This flat trail winds along the shore with beautiful views of Waterlemon Cay. Continue at the end of the beach up the hill for another stunning lookout from a plantation ruin and the connection to the Johnny Horne Trail to Coral Bay.

Hermit crabs range over nearly the entire island. White tail deer have become more common, which also results in increased vsiability in the bush near trails where the browse on lower vegetation. Iguana are fairly common to see, and lizards of all sizes are ubiquitous. Coming up from Reef Bay beach watch the land crabs scurry back into their holes along the flats. There's also a species of large black butterfly that seems to dive bomb runners in these valleys.

The sugar plantation ruins throughout the course were from Dutch settlements in the 1800s with the last working one on Reef Bay Trail lasting into the early 1900s running on steam engines. The circular stone structures for donkeys to grind the cane are featured at Annaberg right before the Leinster Bay Trail.

in US Virgin Islands 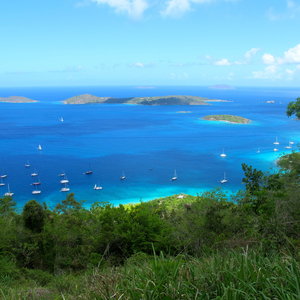 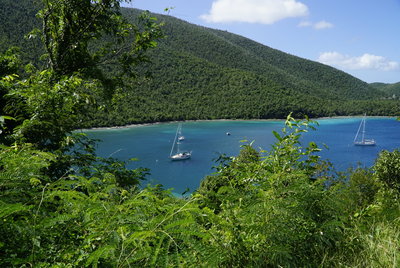 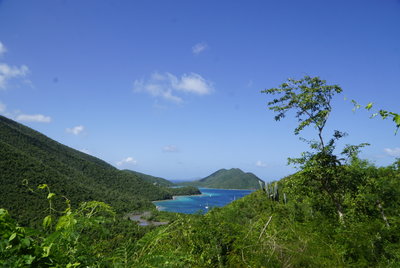 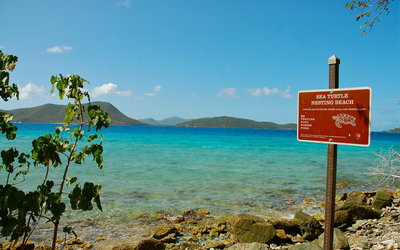 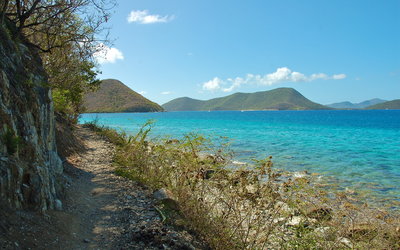 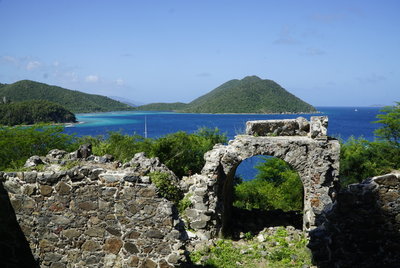 Reef Bay Out and Back