“This legacy roadbed runs north-south from North Eldridge Parkway to the old Turkey Creek near the dam. ”

This is a trail in Addicks Reservoir that is not maintained. Please comply with Corps of Engineer's regulations by not disturbing the ground or vegetation. Refer to the "Addicks Reservoir" page for area-wide information.

Note that the Corps of Engineers may close areas to access for wildlife control operations. Look for signs at the entrances to Noack Trail and Miles Trail and please do not enter the area if marked as closed.

This trail follows a legacy roadbed south from access at North Eldridge Parkway. Though most of the trail is well drained, there are several points that are hard to detour around after rains. There is an option to reach eastbound Bauer Trail that is less prone to standing water.

The access point is a turn-out on Eldridge about halfway between Clay Road and War Memorial. There is a steel gate which you have to climb over. After a short run to the southeast, the old roadway runs due south to Bauer Trail, passing the intersection with the Phillips Cutoff. The last 50 feet or so of this portion of Noack Trail is low and remains boggy for a long time after rains. It is hard to detour around this bog if you want to go west.

(If you want to go east on Bauer Trail, the Phillips Cutoff is higher ground and will take you near the head of the Hermann Hospital Trail. The large open field was the drillsite for the Bauer Estate No. 1, which was drilled by Phillips Petroleum Company in 1986. Since it was an oilfield road, the cutoff is relatively high and well-drained.)

Be prepared for mosquitoes and fire ants.

According to US Army Corps of Engineers' records, the northern end of this trail is on the boundary between land previously owned by Max Noack and a tract of about 354 acres owned by Jerry C. Bauer and his wife. Max Noack owned about 125 acres on the southeast corner of Clay Road and the old Addicks-Fairbanks Road (now North Eldridge Parkway). The majority of this trail is on land that belonged to the Bauer family before being acquired for the reservoir. 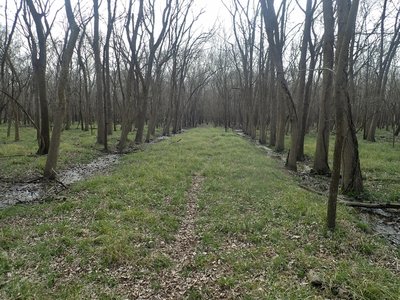 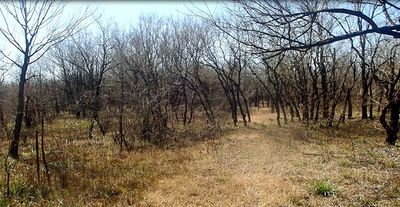 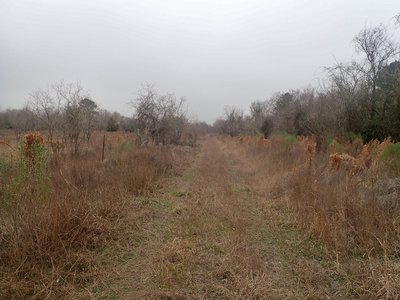 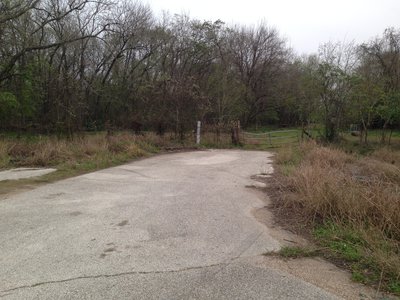