“Enjoy spectacular views of Saint Helens and its blast area on your way to the summit of Coldwater Peak with 360 views. ”

Enjoy arguably the best views of Mount Saint Helens nearly the entire duration of this run through the area devastated by Helens' eruption. The first half of the run is on relatively flat easy trail, followed by an ascent that brings Adams and Hood into view, a rock archway, switchbacks, and finally 360 degrees views of Helens, Hood, Adams, Rainier and more from the summit.

You need to check in at the Johnson Ridge Observatory and pay the $8/person fee to get wrist bands. Interagency passes are accepted, but you must bring these with you to the Observatory (don't leave them in your car).
There is zero shade along this entire route and no permanent water, be sure to bring sunscreen and extra water.

This route starts at the main parking lot of the Johnson Ridge Observatory at the end of paved WA 504. You'll be able to see the summit of Coldwater Peak to your north east from the parking lot. The antenna-covered mesa-like summit appears much more daunting than it is: the eastern side is a relatively gentle slope.

From the parking area follow the paved path to the Observatory to check in, get your wrist bands, some history, an amazing view of Helens, and - importantly - use the restroom as there is no privacy along the trail. Take the paved Eruption Trail with the crowds to the east to pick up Boundary Trail #1. Continue east on this wide gravel/packed dirt trail. Although you'll be distracted by Saint Helens towering over you to the south, be sure to keep an eye out for mountain goats on the southern slope of the ridge and elk far below on the pumice.

The trail has been recently rerouted to bypass Devils Thumb (Devils Point?) due to erosion on the west side, but you can take the east side trail to the point if you want. Otherwise just continue on Boundary Trail #1 past Truman Trail #207 and slightly northeast to an intersection with Harry's Ridge. Harry's Ridge is a short dead-end trail up the ridge that is worth taking partway for an excellent view of Mount Adams over Spirit Lake at a fine snack spot. You could do the whole thing but you'll get similar views during the next ascent. However; if you're looking for an easier shorter trail Harry's Ridge as an out-and-back to Johnson Ridge Observatory is a fine option, but you'll miss Rainier.

Climb up the ridge to the north - still on Boundary Trail #1 - and leave the crowds behind. From the top of this ridge you'll of course have spectacular views, but you'll also see one of the cooler parts of this run coming up: a rock archway in the ridge that the trail passes through. It frames Mount Adams to the east which makes for some nice photo opts (although with difficult lighting). This is the only section of this run that has any exposure, and it's limited.

Continue along Boundary Trail #1 past Coldwater Trail and finally to the beginning of Coldwater Peak Trail which is well marked with a wooden sign. The trail to the summit consists of simple singletrack switchbacks that are easy to follow and keep the whole ascent a class 1/easy class 2 at most. You'll also have continuous great views as you climb.

There is seismic equipment at the summit used to monitor Helens, antennas, and solar panels. There is also plenty of space for groups to space out, find great photo angles, and rest. The south, west, and north edges are very steep (hence the mesa-appearance from the parking lot) so be mindful of that. To your north you should be able to see Mount Rainier; to the northeast you can see the Goat Rocks over Whittier Ridge; to the east you can see Lake Saint Helens below you, Spirit Lake, and Mount Adams; to the south and a little east Mount Hood will be popping over; and of course Mount Saint Helens dominates to the south.

After you've sufficiently enjoyed the exceptional views retrace your steps back to the parking area (but now you can skip the Eruption Trail and go straight to your car if you don't want to visit the observatory/restrooms again).

All the trees in this region where knocked down by the eruption or are younger than 1980, so the area is wide open. This makes for good viewing of local animals such as elk, mountain goats, and the plentiful ground squirrels.

On May 18th 1980 a 5.1 magnitude earthquake caused the largest known debris avalanche in history on the north side of Mount Saint Helens, then 9,677 feet tall, and triggered a massive eruption. This eruption would kill 57 people and devastate 230 square miles of land. One of those killed was geologist David A Johnson for whom the observatory and ridge are now named. The area has been left to recover naturally and is still mostly barren. You can still see masses of trees knocked down by the blast floating on Spirit Lake today. 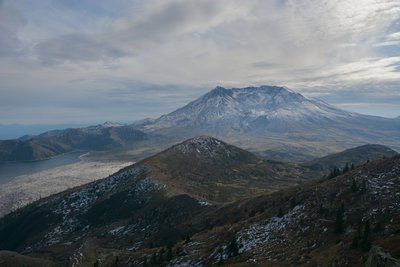 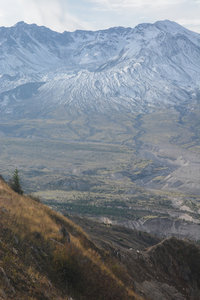 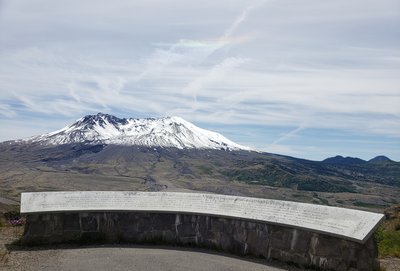 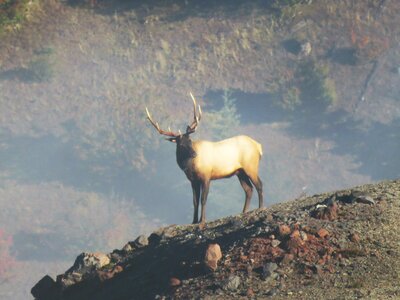 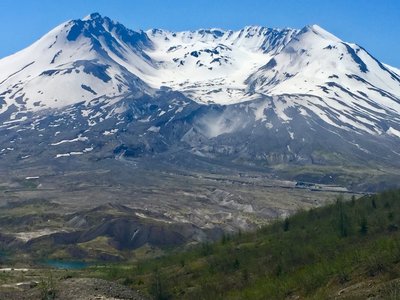 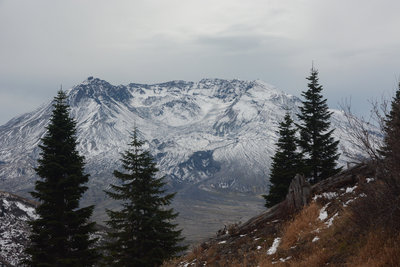