Although known as the Contour Path you'll do a significant amount of ascent and descent, and yet almost the entire route is runnable. In summer, there is little water on the route so carry sufficient to last you the whole trail. In winter there is normally an abundance of water.

This trail can be taken in either direction, in full, or in part as an out-and-back or as a means of getting to one of the numerous ascents of Table Mountain such as Nursery Ravine, Skeleton Gorge or Platteklip Gorge.
Although known as the Contour Path, there are several ups and downs along the trail that will test your legs, the most notable of which is Aloes, the section of the trail that crosses an old rock slide. Aside from this, the full trail is doable for a reasonably fit runner.

From the parking area at Constantia Nek, follow the wide gravel road up the hill. At the boom, take the left fork. After a further 1,600 ft/500 m the road doubles back - carry on straight here. (The double back is the Bridle Path or jeep track that goes up to the reservoirs at the top of the mountain.) After passing through Cecilia Forest follow the wide road upwards until you reach a small stream where the wide road abruptly becomes a singletrack. Keep to the left on this path and ascend the steps to reach a signboard map marking the boundary of Kirstenbosch. Continue straight ahead without descending into Kirstenbsoch or taking the left path towards Cecilia Waterfall.

From here you'll cross several ravines, including Nursery Ravine, Skeleton Gorge and Window Gorge. After this you'll need to take the left fork which zigzags up the lower slopes of Fernwood Peak finally reaching fallen scree (the section known as The Aloes, and marked as such on the Slingsby map). Cross the scree and descend the zigzags on the other side and you'll reach a very large boulder.

From here, the trail alternates between dirt singletrack and boardwalk, past Hiddingh and Ascension Ravines. You'll know when you reach the base of Newlands Ravine as there is a well-constructed wooden hexagonal table and benches on a platform. Continue on until you reach a stile, cross over and follow the road upwards until you reach King's Blockhouse (built in 1795) on the slopes of Devil's Peak. Just above the Blockhouse the trail continues with Tafelberg Road below you. Cross over the Platteklip Gorge trail and the India Venster trail, and continue until you reach Kloof Nek Corner below Kloof Buttress. You can descend the 213 steps to Kloof Nek if you wish.

Mostly fynbos, although the section above Kirstenbosch and Newlands Forest are shaded by indigenous trees such as Red Alder (Rooiels), Milkwood and Yellowwood.

in Western Cape and Cape Town

in Western Cape and Cape… 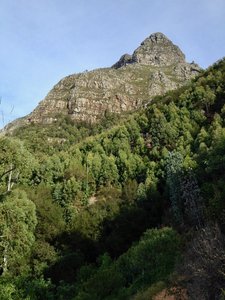 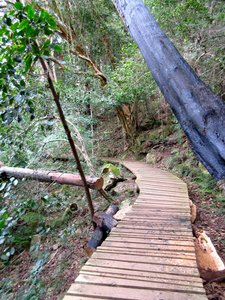 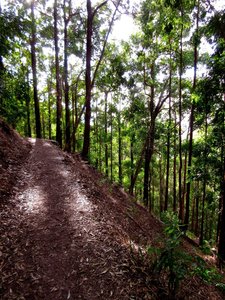 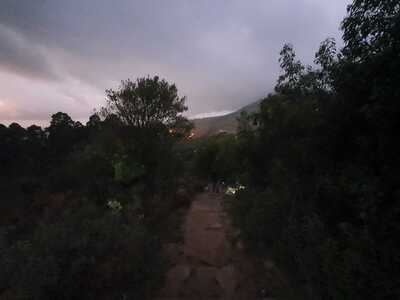 Aug 30, 2020
Ashley Brown
Set out to do 07:30/k for my first Contour Path trail run, completely misjudged the elevation though. Had a slight slip due to the wetness of things — 2h 13m