“The most direct, and probably most popular, route to ascend Table Mountain. ”

High winds close the cable car. If you plan to ascend the mountain via Platteklip Gorge and head down using the cable car, check the weather forecast, or you may be required to return the same way you came up.

Start as early in the morning as possible. This will allow you to avoid the heat in the Gorge, but more importantly to avoid the large number of hikers that ascend/descend this route, especially during the busy summer period in Cape Town.
Take sufficient water in summer, as there is little on the route. In an emergency, you can head over to the Upper Cable Station from the top (approximately 750 meters).

Platteklip Gorge is (in my opinion) the least attractive route on the mountain as it's essentially a stone staircase providing little in the way of the stimulation or motivation of other trails on the mountain, and due to its popularity offers no solace (unless you start really early on a weekday morning). Having said that, it does make for excellent strength training (just avoid the busy hours on a good weather weekend) and is a means to an end - if that end is ascending Table Mountain as quickly as possible.

Start from the trailhead on Tafelberg Road—1.5km past the Lower Cable Car Station. It is well marked by a signboard and car park. Head straight up on the trail and after 400 meters, you'll come to a junction with the Contour Path under the shade of some trees and beside the stream. Turn left here and after a further 100 meters turn right.

From here, the trail zig-zags in ever-decreasing in length switchbacks. Stick to the trail and do not take short cuts—to do so would lead to erosion to the slope and possible injury to you. As you near the summit, the walls of the Gorge draw closer and, depending on the time of the day, provide respite from the sun. At the summit is a War Memorial and a map. You can head right (west) for 700m to reach the Upper Cable Station or left (east) for 1.5km to reach Maclear's Beacon, the highest point on Table Mountain at 1,084.6 meters above sea level.

This trail, due to its exposure, does not have the full array of Table Mountain flora that you'll come across on other trails, but you'll still encounter many varieties of fynbos. If you are one of the first or last on the trail, you may be fortunate enough to spot a Himalayan Tahr (as I have). 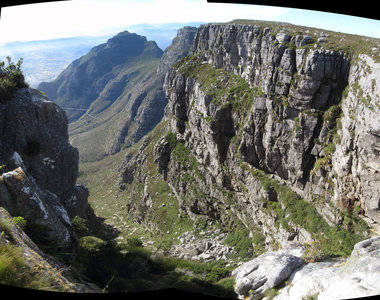