This route hops on and off several marked trails for a nice loop; park at the Kilburn Pond Trailhead.

Begin at the Kilburn Pond Trailhead off of Route 63. There is ample parking, with the suggested donation of $3. Maps are available (definitely grab one as there are several intersecting trails, some better marked than others).

Head out on Kilburn Road. The trail is well marked; after about 0.5 miles, you'll reach an intersection with a white arrow. Follow that over a small bridge/river crossing. The other direction says "Not maintained trail." We weren't certain if the white arrow indicated the portion of the Kilburn Loop that dips south for a few miles (not what we wanted to do) but it does not go that way—just takes you to the Pisgah Ridge Trail.

As soon as possible, begin following signs for the Pisgah Ridge Trail. At the first intersection, take a right to add length to your run and to run to two nice vistas. If you go left, that will make for a shorter run, and you'll miss the views. We went right, and it was the best part of the day!

At the next big intersection, take a left onto Reservoir Road to head north. Continue taking lefts on Reservoir Road at the next couple intersections. I've heard there are some nice detours off of some spurs, but we were struggling with the mosquitoes at this point so we opted out.

Eventually, you'll come to a fork with the Baker Pond Trail and Reservoir Road. Take the left fork onto the Baker Trail.

At the next fork, take the right path to continue past Baker Pond, which looked nice and possibly swimmable (definitely the largest pond we saw, and not standing water!) However, I'm not sure about regulations on swimming here.

Just after the pond, take the left fork onto the Davis Hill Trail. This will lead you back to the Kilburn Parking Area. Shortly after the Davis Hill Trail fork, you'll reach another fork not shown on the map. One trail is marked with blue diamonds and the other with white rectangles. We took the white trail, and I believe we missed out on a couple nice vistas. The blue path intersects back with the white path a little ways up, before the parking lot, so I believe either would work.

This would have been a great hilly run if not for the mosquitoes! As such, it's probably best in spring or fall.

We did this trail in late July and there were a crazy number of mosquitoes. Do not attempt without backwoods-level bug spray. Lots of standing water and still ponds make it ideal mosquito breeding territory.

We also saw some cute toads and various fungi. Dragonflies can be occasionally seen at small river crossings. 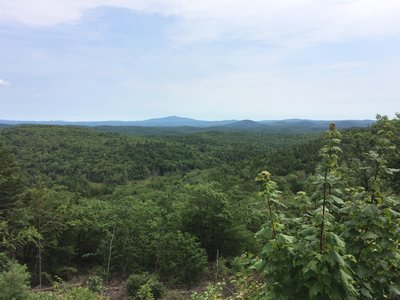 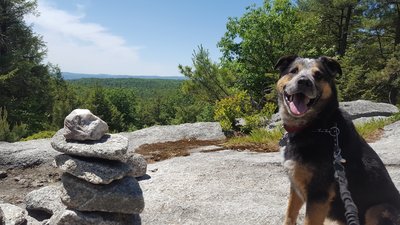 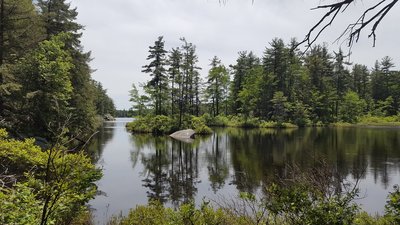