“This trail runs at or near the top of the Marble Rim providing superb views and colorful flowers for its entire length. ”

The Marble Rim is one of the best known and popular destinations in the Marble Mountain Wilderness, but I have not found a definite answer to exactly what should be considered part of the Rim. As best I can tell, it is the high ridge that forms a quarter circle from Marble Gap to a point above Rainy Lake, including Marble Mountain itself. On the west and north sides, the cliffs drop precipitously down to the broad meadow below. However, many runners consider the ridge running east of Marble Mountain to be part of the rim and they are satisfied to reach the PCT above Sky High Valley, where there are great views of the eastern side of the mountain and sweeping views in all other directions.

Marble Rim Trail starts on the ridge about 0.7 miles east of Marble Mountain at the junction of the PCT and Haypress Trail. This is about 0.5 miles west of the junction between the PCT and the Sky High Valley trail. Once you've come roughly 10 miles from Lover's Camp and climbed almost 2000 feet to get to the Marble Rim Trail, the trail itself is easy, with only gradual ups and downs, except for the final 300-foot drop to meet the Haypress Trail again. But most runners will turn around before that. There is no water on the Rim Trail, so most people will camp near Sky High Lakes or Marble Valley.

From the PCT junction, the trail climbs gradually towards Peak 6887, labeled Marble Mountain by NeoTreks. Along with the sweeping vistas, the flowers on this trail have more different colors than I've seen anywhere else and there are huge numbers of various kinds of butterflies. The rocky top of Peak 6887 is not quite as close as it appears. It is easy to climb, but it is about 360 feet higher than the point where you'll probably start the climb.

The trail continues on around the mountain and then passes next to the 1200-foot cliffs that drop towards the meadows below. Currently, after Peak 6887, the trail becomes increasingly overgrown the farther you go. However, a CCC crew should clear this trail by early August 2017.

Currently the subsequent trails are so overgrown that you cannot reach the Salmon Ridge via the Haypress Trail, and you cannot create a loop using the Rainy Lake Trail to get to the Marble Gap Trail. The CCC crew hopes to set up camp at Rainy Lake in August 2017 and clear the surrounding trails, but there is no guarantee.

Surprisingly, there are many large caves on Marble Mountain, but you need to be in a spelunking group to locate and enter them.

Trail is surrounded by flowers of many colors and there are more butterflies than I have seen anywhere else. 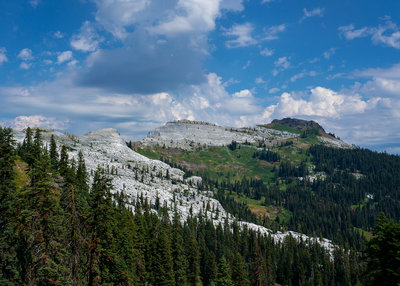 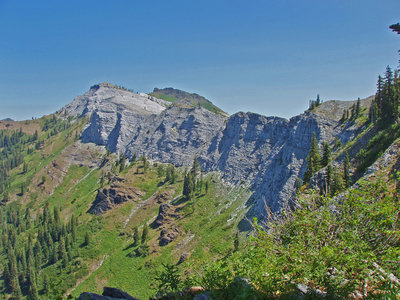 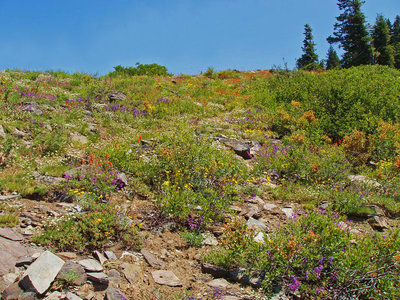