“A point to point run from Freeze Out Point to Tongue River Canyon TH! Have fun! ”

This is an all downhill point-to-point run from Freeze Out Point to the mouth of Tongue River Canyon. It starts off on two-track and moves to singletrack after a few miles. This run offers some memorable views of the Northern Bighorns, and is steep on the descent with tricky footing in last few miles of the canyon. Most people call this a 10-mile run.

Start by leaving a retrieval vehicle at the Tongue River Canyon Campground or further down the canyon towards Dayton. Next, drive your shuttle vehicle up Highway 14 from Dayton, go onto 14a at Burgess Junction, and turn right on Road 15 to cross the N. Fork of the Tongue River. After a while, turn right onto Road 168 which feeds into Freeze Out Cow Camp Road (199). Keep straight to take Freeze Out Point Road (202) up to the overlook and the start of the run.

Head back down Freeze Out Point Road (202), at the intersection turn right to run the east half of Freeze Out Cow Camp Road (199) as it descends to the south into the canyon. Just after 1.5 miles, make a left turn onto the Amsden Elk Pasture Road (181) for a half-mile before turning onto the start of the Horse Creek Trail #159. There are enough roads and paths in the area that it can be easy to get lost, but if you're on a faint jeep-track at this point, you're in the right place.

Descend into the trees before starting a tough climb. The grade will peak out about a half-mile before the trail converges with Tongue River Canyon Trail #002 and begins a descent that will take runners down through the canyon.

The remainder of the run is surreal and steep. Squirm down it like a bucking cutthroat trout. Yeehaw! Near the end of the canyon, the trail encounters some drop-offs and ledges. A fall might include rolling fifty feet into a whitewater river, so be alert. The lower parts of the run include oodles of tourists. Give uphill runners the right-of-way.

The Bighorns are still wild. The nearby battle of the Little Bighorn was fought ten years after people in New York started running subway cars to work. Plan appropriately.

in Freeze Out Point

in Freeze Out Point 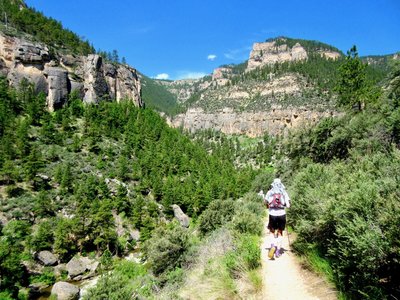 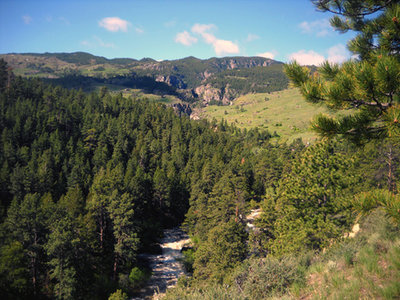 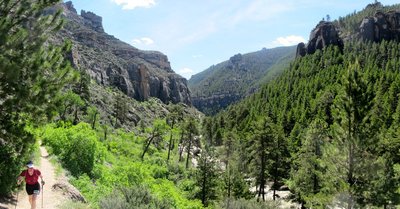 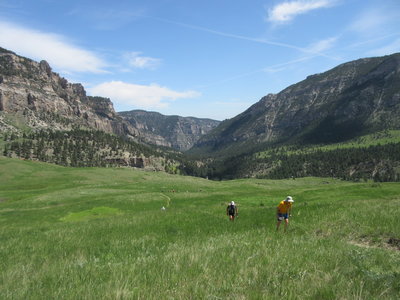