“Traverse the mountains between El Paso and Las Cruces on this National Recreation Trail. ”

The Sierra Vista Trail is open year round and free to use. Motorized vehicles are prohibited, but are still seen on occasion.

Trail users should keep in mind that recreational shooting, while illegal, occurs periodically in some locations. While the vast majority of shooters mind their own business, it would be wise to steer clear of anyone unfamiliar with a gun. As a remote desert trail, it's always a good idea to run during daylight hours and to go with another person if possible.

Sierra Vista's five trailheads are marked on the map. Talavera is the only parking with paved access. Pena Blanca and Vado require a few miles of travel on rough dirt roads.

Most of the trail is in good condition. Generally, the rock coverage isn't as severe as other trails in the area, and few plants encroach upon the trail.

The notable exception is the portion between the Vado trailhead and Webb Gab (where the trail crosses to the east side of the mountains). Numerous problems exist here. Sections on the dirt access road can be very sandy. Erosion and washout damage requires a detour just west of the Gap. The singletrack east of this area is overgrown in many parts. Numerous groups are working to repair this area, so expect improvements over time.

Cell phone reception is good throughout the entirety of the trail. However, as the trail is difficult to access in some areas, it's still wise to let someone know where you will be. Bring water; none is available at the trailheads.

Connecting Las Cruces and El Paso, the Sierra Vista Trail takes runners along the base of the Organ Mountains, providing a unique glimpse of the American Southwest desert.

From the northern trailhead, the route begins as a well-maintained dirt singletrack, with a few small rocks scattered along the way. This is the condition the trail will be in for most of its length. The path makes a number of small climbs over the short ridges and gullies of the foothills. A good variety of lowland desert plants circle the trail, with an unusually dense number of barrel cacti, native to this region.

After circling around a few outlier hills and passing through a gate, Sierra Vista crosses a road and continues past the Talavera trailhead. The trail through this section is similar to the previous one, a bit rockier but uncomplicated and with great mountain views. As the trail leaves behind the homes along the foothills, it passes through a field of white thorn bushes and merges briefly with a dirt road before continuing south. Near the six mile point, it briefly follows a barbed wire fence. At the end, it reaches the Wilderness Study Area, a section thick with plant life.

As the path approaches the Pena Blanca trailhead, its namesake rock formation becomes visible to the southeast. Continue across the dirt road to the third trail section. The initial portion, in an arroyo, can be hard to follow, so use the GPS track to stay on course. Some interesting caves can be seen along the mountains through here, along with the prominent Bishop Cap formation. As the trail moves away from the mountains around the thirteen mile point, it enters a grassland and becomes hard packed sand. After a few miles it returns to rolling over the ridges, coming to another trailhead.

South of Vado, the trail follows a straight, dull dirt road for six miles. The crossover at 20.5 is along a washout; use the GPS for reference. It then turns east along another road, bypasses a washout, and crosses over to the east side of the mountains. The crossover segment is in poor condition and overgrown, so be careful. The next segment is along a flat, easy dirt road. Runners may hear the tanks of Ft. Bliss practicing to the east.

After crossing the highway, Sierra Vista returns to singletrack once more. It technically ends at the state line, but an extension continues south, passing an interesting cave, before finishing at a washout near Northern Pass.

Just about every variety of plant and animal found in the Chihuahuan Desert can be found along the Sierra Vista Trail. Creosote bushes are by far the dominant plant. Ocotillos, sometimes in dense fields, are another common sight. Several areas will feature cacti, including prickly pear and barrel. Spanish Dagger are becoming more widespread, some growing quite tall. A Wilderness Study Area between the Talavera and Pena Blanca trailheads is a particularly good area to see desert flora.

As for animals, the most common sightings along the trail will be roadrunners, lizards, and the occasional hawk circling overhead. Coyotes are a rare sight and might be heard towards dusk. Mountain lions are almost unheard of but have been reported. Also, as some of the BLM land covering the trail is leased out to ranchers, cattle can occasionally be sighted. Keep in mind that they don't like being startled, and a charging bull can ruin anyone's day. 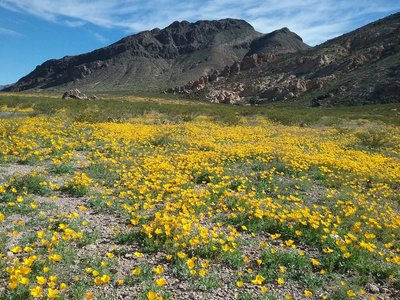 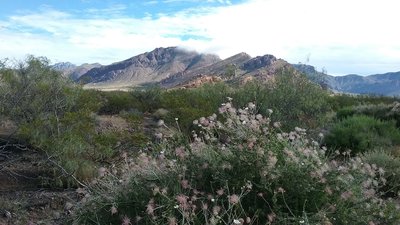 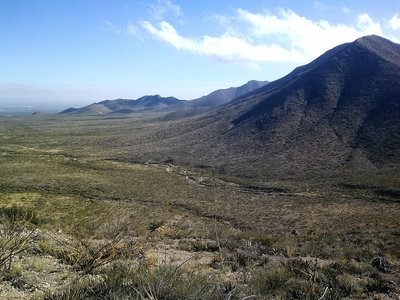 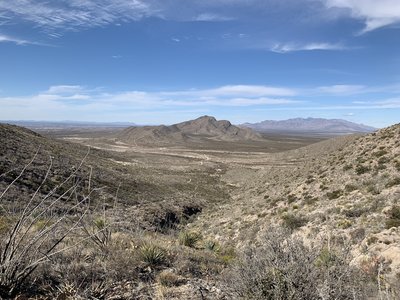 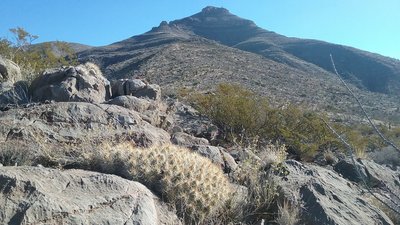 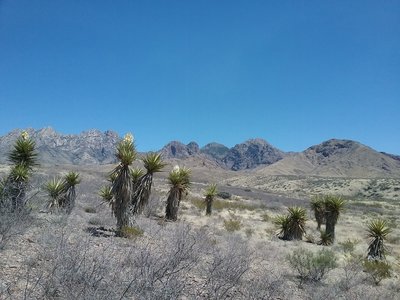