Volcanic Features (east end)
Cinder Cone - 6,907 ft. cinder cone volcano made up of loose rocks, ash and cinders thrown out of a single crater and building up around this crater. Cinder Cone was formed by eruptions in the mid 1600s.
Painted Dunes - the massive amount of ash spewing from Cinder Cone created volcanic ash dunes at the base of Cinder Cone. Their colors range from ochre to orange to beige and brown due to oxidation of the ash.
Fantastic Lava Beds - acres and acres of black basalt boulders to the north, east, and south of Cinder Cone. These have large quartz crystals in them, large due to the slow cooling of the basalt lava oozing from the base of Cinder Cone.

History
During the mid 1800s, many settlers and miners migrating from the east, used this trail to reach California. This trail was popularized by William Nobles as a way into the Sacramento/San Francisco area that did not have to cross the higher Sierra Mountains to the south.

Nobles Emigrant Trail (East) is found along the park road about a quarter mile south of the Hat Creek Trailhead parking area. There is a traihead sign saying "Nobles Trail" for it behind a large gate, on a fire road style trail. The entire trail is relatively flat, making for easy running.

Hat Creek (mile 0 - 4.3)
This section of Nobles Emigrant Trail (East) follows Hat Creek downstream. The trail starts off on a wide gravel road that soon turns into dirt, in the pine forest with low ground cover. Starting off, Lassen Peak can be seen to the southwest above the trees. At the 0.4 mile mark Hat Creek is crossed on a wide metal bridge. Continuing on, the trail is in the 2012 Reading Wildfire burn area so the forest becomes more open with many burnt and downed tree trunks. Hat Creek is close by to the right (east) up to the 2.0 mile mark. Then the trail veers away from the creek, but returns to cross it at the 3.0 mile mark. Be prepared to get your feet wet. After crossing the creek, the trail runs near the creek for the next mile to where Horse Corral Trail is found. Leaving the creek after passing Horse Corral Trail, Nobles Emigrant Trail (East) joins the PCT at the 4.3 mile mark.

PCT (mile 4.3 -9.0)
At its trail junction with the PCT, Nobles Emigrant Trail (East) veers east onto the PCT, a well-travelled singletrack path here, and follows the PCT for almost five miles. This section continues in the regenerating pine forest. Many healthy trees are mixed in with the burnt trees along the trail here. The large meadows of Badger Flats are passed on the right (south) at the 6.2 mile mark, followed immediately by the Cluster Lakes Trail junction. Next is Soap Lake seen off to the right (south) at the 7.8 mile mark. About a mile later, Nobles Emigrant Trail (East) splits from the PCT that turns south. Stay to the left here to continue on Nobles Emigrant Trail (East).

Volcanic Features (mile 9.0 - 13.2)
Leaving the PCT, Nobles Emigrant Trail (East) becomes less travelled and so fainter. Gradually, the trail emerges from the burn area, the dirt trail gives way to volcanic sand, and the trees become sparse as the Cinder Cone volcanic area is entered. The trail bends left (north) around the 10.7 mile mark as other-worldly volcanic landscape appears to the right (east) - Cinder Cone, Painted Dunes, and Fantastic Lava Beds. Just before the trail ends, the pines return and Butte Lake comes into view. The trail ends at Butte Lake and a campground.

Except for the east section near Cinder Cone, much of this trail is in the regenerating burn area of the 2012 Reading Wildfire. In this burn area, the green ground cover is low growing, and there are sections of healthy pine forest and sections dominated by burnt trunks. In the east near Cinder Cone, very little grows in the volcanic sand - only the occasional hardy pine tree is found here. 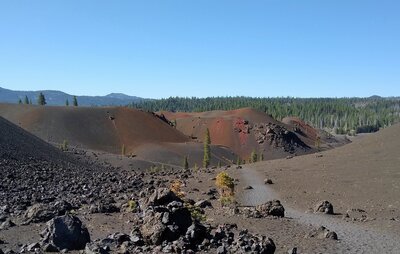 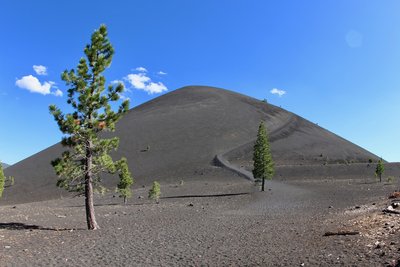 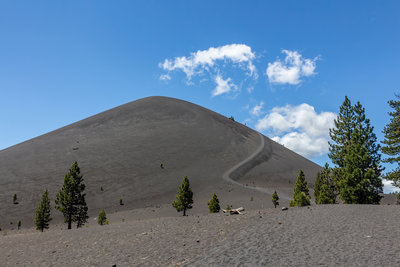 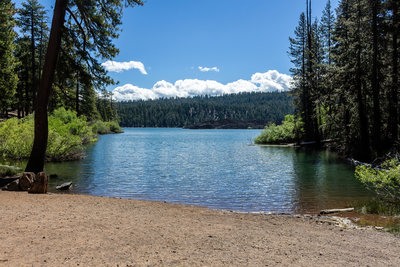 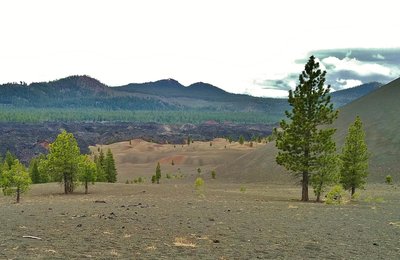 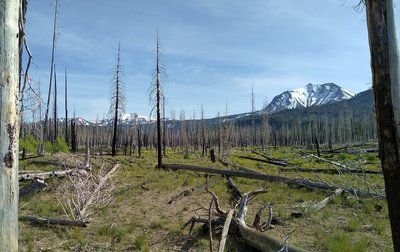