“Clinging to the side of Crazy Cat Mountain, this challenging trail overlooks El Paso's west side. ”

El Paso is in the desert, so be mindful of the climate. Summers are regularly in the 90's or above, winters will drop to the 30's and 40's. Lightning storms are frequent in the late afternoons during the warmer months. Winds are frequent and gusts over 40 mph are not unusual. Dust storms, strongest in the late spring, can be hazardous and reduce visibility to less than a quarter mile. Check the weather before you go, and let someone know where you will be.

Circling around a mountain (really, a foothill) with the same name, Crazy Cat is a tough, rugged trail with a fantastic view of the western edge of Texas.

Just about any method used to access Crazy Cat will require some climbing, but taking either Vertigo Ridge or Thousand Steps Trail from the Stanton Street trailhead is the shortest route. The trail splits off from Vertigo Ridge just east of two utility poles. A singletrack path makes a low grade but somewhat technical climb towards the north end of Crazy Cat Mountain. The path is rocky, even by Franklin Mountains standards, and requires runners to keep their eyes down to keep from tripping. Several sections cross large areas of rock slab and seem to lose the trail. Keep pressing forward; it picks up shortly after. Bike tracks often help show the way.

The trail turns west near Palisades Connector. As the trail circles counterclockwise around the north end of the mountain, a spur to the left goes to the top.

The high point of Crazy Cat is on the northwest corner. From here on out, it's a steady descent. The trail stays as rocky and technical as it was on the climb, so while it is tempting to pick up momentum, the terrain keeps speed in check. However, the slower pace allows runners to enjoy the outstanding view. Crazy Cat towers above the western suburbs and looks across the Rio Grande into the New Mexican desert. The perspective is one of the best in the area.

Crazy Cat nears cliffside luxury homes around the mile and a quarter point. It then switches back down to two large water tanks. The "main" trail ends just west of the tanks.

Here, two decisions are available if not turning back to make the challenging return trip. Some trail users will take the access road from the tanks to Piedmont Drive, going around the vehicle fence at the bottom. From there, it's a mile on the road to the main Palisades Canyon entrance on Robinson.

The second option is to follow the trail as marked here. Due to a bulldozed area just south of the tanks, it is necessary to keep to the west side of the clearing, descending into the dirt field. The singletrack ends at this point, but continuing forward to the far end will lead to a runoff area between houses that can be followed. This unmaintained section will require navigating some plant growth and rocks before it ends at La Cruz Drive. This can serve as an access point, or runners can circle back to the main entrance or the Sinai Connector on the streets. 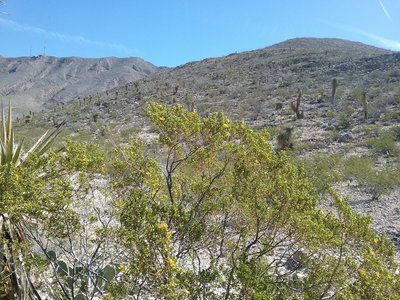