“Desert palms, cliffside caves, and towering hills can be found along this foothill trail. ”

The trails in the southwest section of Franklin Mountains State Park are among the most rugged and technical in the area. Expect rocky sections requiring skill and experience to navigate. Trail shoes are strongly recommended. Also be mindful of mountain bikers using the trail. It can be difficult to give way to runners while finding a good line, so the best option may be to make room for them to pass.

Constantly climbing or descending, Vertigo Ridge is a winding, scenic trip through the northern end of Palisades Canyon. The trail starts at the intersection of Monk's Trail and Thousand Steps Trail, near the base of the latter's steep ascent. Most of the trail is singletrack and very rocky, requiring planning a good line for many sections.

The first half mile is mostly a descent to the bottom of an unnamed canyon. As it goes, the trail passes through dense areas of desert plants: agave, ocotillos, cacti, and creosote. Brown and dried out in the winter, this area can be fairly colorful in the wetter months as the plants bloom. The turnoff for Crazy Cat is about a third of a mile in, just before passing a couple of utility poles.

As the descent levels out, the path turns west to look into an unusually deep canyon cut through the foothills. A group of palm trees grow here, which is an unusual sight after a deep freeze killed off most in the area in the 2000's. Climbing to the top just after affords a view of the top of the canyon. This can be explored further by diverting onto Cave View Spur. An interesting looking cave is cut into the cliff wall, but reaching it without climbing gear would be nearly impossible.

The trail turns northeast along the hillside, overlooking another deep canyon, much wider this time. This segment gives Vertigo Ridge its name; gazing too long at the towering foothills can truly be dizzying.

The path reaches its low point on the other side of the canyon. Don't mistake Sinai Connector for the main trail and miss the turn north. The climb out is steep and rocky, but passes through another scenic forest of sotols on the way up.

Vertigo Ridge ends back at Thousand Steps Trail. The northern parking area for the Palisades Canyon trails is a short distance to the left, or a loop can be made by continuing straight.

This trail has typical flora and fauna of the Chihuahuan Desert.
Texas rainbow cactus, eagle claw cactus, prickly pear cactus, and barrel cactus. In addition you can see ocotillos, sotols, agaves and sumacs. There are several species of lizards, also snakes and birds. 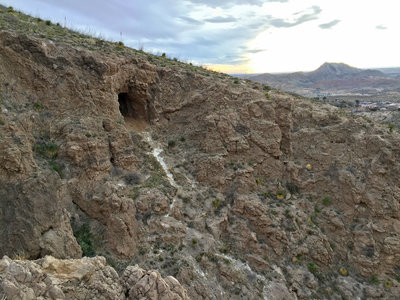 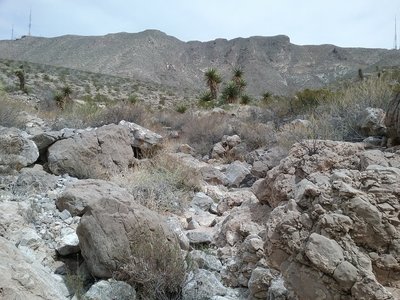 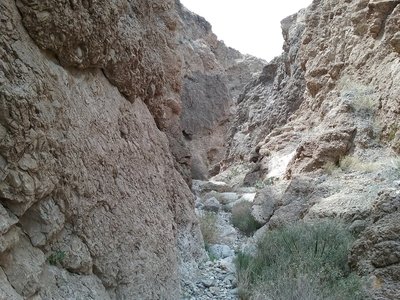