“A fast, flat singletrack leading from Contzen Pass to a saguaro-filled valley. ”

One of the two trails leading from Picture Rocks Road into the park, Ringtail splits off from Cam-Boh Trail a short distance from the pavement. Look left for the path, narrowing from the wider wash down to singletrack.

Ringtail quickly leaves the sand behind for clean, packed dirt. The turn off for Mule Deer is a little after a quarter mile in on the right. Look for a sign. The trail then winds through bushes and palo verde trees, making an easy ascent. There are great sight lines extend across the valley. With few challenges and a low grade, this is a fast route.

The only real challenge comes about a third of a mile into the trail, where it makes a moderate climb for a few hundred feet. Some short, bumpy segments alternate with the otherwise smooth trail here, though the rocks are more of a nuisance than anything.

The trail ends at a wide section of Picture Rocks Wash. Continuing to the left will go to the dead end terminus of Picture Rocks, though there's not really any reason to do so. Connections to Cactus Canyon, Ironwood Forest, and Brittlebrush are a short distance ahead to the right. If picking up Ringtail from this side, the sign is partially covered by overgrowth, so keep an eye out for a singletrack exiting the wash to the north. 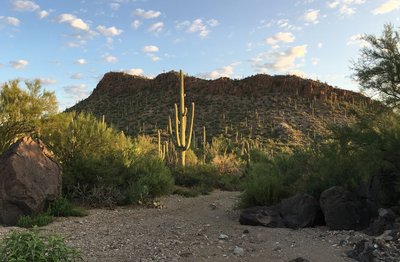 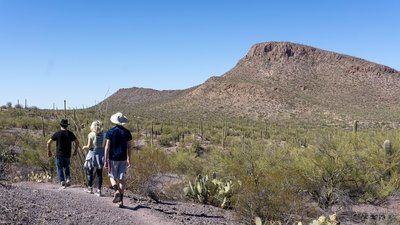