“Half dirt singletrack and half sandy wash, Brittlebrush connects to the heart of the national park. ”

Leading to the center of the northern Tucson Mountain District's trails, Brittlebrush is a winding path leading around a foothill and through a wash.

Brittlebrush begins just before Thunderbird hits the mile and a quarter point. It's missing the trail sign that marks most intersections in the park, so look for a rock cairn by an easy to spot singletrack heading uphill. The path is a narrower version of the rocky portions of Thunderbird, with similar issues of close-growing cacti.

Head around a small boulder pile on the left and push a quarter mile up to the crest of a hill. Thousands more saguaros cover the valley ahead, making for a vivid scene. The descent from the top is similar to the climb; relatively low grade but bumpy.

As Brittlebrush reaches the bottom, it'll cross a washout around the half mile point before joining it another tenth of a mile ahead. Most of the remainder of the trail will be in the wash. Users accessing the trail from the north side will find it about the same as Picture Rocks Wash: sandy, gritty, and tiring to run through. Sticking to the firmer earth around the edges, at least where it exists, can help.

After making a distinct U-shaped curve around a raised section, some brief respite can be had on a hard packed segment to the left. It only lasts for a few hundred feet, heading right back to the wash before ending at the intersection with Picture Rocks Wash. A trail sign, facing northeast, marks the split. Turn right onto Picture Rocks for a few hundred feet to reach the hard-packed Ironwood Forest on the opposite side, a welcome relief from the sandy slog. 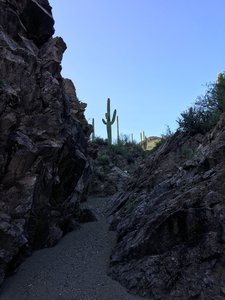