“A nice easy trail to a lovely lake, with good chances to view moose, bear, and waterfowl. ”

The trail lies in the Riddle/Solution Bear Management Area and are closed April 1 through June 30.

The Riddle Lake Trail begins on the West Thumb to South Entrance Road south of Grant Village, near the Continental Divide. This easy, fairly flat 2.5-mile trail leads to good-sized Riddle Lake, a lovely lilypad lake located near the top of the divide.

The trail travels through dense, mature lodgepole forest, interrupted occasionally by small areas of younger lodgepoles that resulted from earlier forest fires. At the 1.7-mile mark begins to break out of the trees and at 2 miles reaches Riddle Lake. The marshy meadow south of the trail provides good habitat for moose. It also supports a healthy population of moisture-loving flowers like pink shooting star and elephanthead, and purple monkshood.

Riddle Lake is surrounded by meadows on the south, west, and east sides. A good portion of its 274-acre surface is covered with lily pads. It is a lovely setting with Mount Sheridan and the Red Mountains as a backdrop. Nature is slowly converting the lake to meadows through a process called "eutrophication." Over time, these lilies, together with other vegetation and debris washed in by streams, will gradually fill up the lake bottom. Trees and shrubs will encroach from the sides and eventually the lake will be no more.

The lake is also a great place to observe waterfowl, including white pelican, osprey, blue heron, sandhill crane, and an occasional bald eagle.

In the 1800s, early explorers wrote about a lake that sat directly on the Continental Divide, whose waters flowed to both oceans. Early map-makers thought this was such a lake. Others thought it was a riddle as to which side of the divide it sits, since it had no apparent outlet. Upon closer observation, however, a small stream was found to sneak out of the meadow on its eastern side. This stream flows to Yellowstone Lake, hence the riddle was solved. Naturally, they named the creek “Solution Creek.”

The trail continues another .5 miles along the northern shore of Riddle Lake to its end at 2.5 miles. 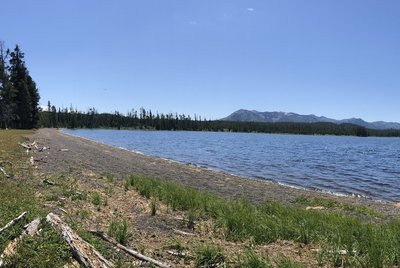