“Spectacular 250-foot Union Falls is one of the most beautiful falls on the planet! ”

The Falls River ford should not be tried before mid-July. Even then its a tricky, swift, cold, 40-foot, knee-deep ford.

Starting on Grassy Lake Road, this route leads past multiple great backcountry campsites to reach two beautiful falls. After a difficult ford of the Falls River, the trail follows the remnants of an old wagon road built in the 1880s by Mormons. A spur trail leads up Mountain Ash Creek to a viewpoint over spectacular 250-foot Union Falls. For a little fun on the way back, a short spur leads to Scout Pool, a naturally heated swimming hole at the base of a small falls.

The trail begins just south of the park at the base of the Grassy Lake Reservoir dam, on the Flagg Ranch to Ashton, Idaho NFS road, 10 miles west of Flagg Ranch. The gravel road is sometimes closed early in the summer due to spring washouts. Check with the Targhee National Forest or at Flagg Ranch before heading out. Also, the road to the base of the dam may be too steep and rough for some cars. To avoid getting stuck, you may wish to park your car near the top of the dam and work your way down to the trailhead on foot. The Falls River ford should not be tried before mid-July. Even then it's a tricky, swift, cold, 40-foot, knee-deep ford. Although this 16.6 mile trail can be done in a very long day, reserve a backcountry campsite and take time to enjoy one of the best routes in Yellowstone.

The trail leaves the base of the dam and follows Grassy Lake’s outlet stream and then the Falls River over level terrain for the first 1.1 miles. The trail then crosses the Falls River on a tricky, swift, cold, 40-foot, knee-deep ford. The southwest corner of Yellowstone is the wettest, receiving almost 70 inches of precipitation a year. The Falls River and its tributaries drain this Cascade Corner of the park. Just 15 miles downstream this river is a raging torrent over 200 feet across, rivaling even the mighty Yellowstone River. Fur trappers in the 1830s, familiar with this important Snake River tributary, named it "The Falling Fork" in recognition of its many falls and cascades.

Shortly after the ford, the trail passes the Pitchstone Plateau Trail on the right, leaves the Falls River drainage, and ascends 250 feet, then drops 130 feet, only to regain it. You are actually following an old wagon road built in the 1880s by Mormons connecting Marysville, Idaho with Jackson Hole. At the 3.5-mile mark the trail begins a steep 600-foot drop to Proposition Creek. On the way down, the trail affords nice views of the Falls River Basin to the west.

At the 4.9-mile mark the trail crosses easily forded Proposition Creek. It then travels up and over a small ridge and arrives at a junction with the Union Falls Trail, at the 5.8-mile mark. Turn right and follow the Union Falls Trail up Mountain Ash Creek. The creek was named for a beautiful rose-family shrub with clustered white flowers and bright orange-red berries named Cascade Mountain Ash. At the 6.4-mile mark the trail makes an easy ford to the west side of Mountain Ash Creek, just upstream from its junction with a large unnamed tributary (sometimes called the "North Fork"). There are several good campsites in this area. Notice the striking difference in temperature between Mountain Ash, which is a typical cold mountain stream, and its tributary, which is naturally heated by upstream thermal activity. A good friend joked that this is the only backcountry campsite with "hot and cold running water!"

From the ford, the trail begins a 270-foot climb. At the 7.4-mile mark, the trail passes the North Fork Trail on the left (we’ll take this short .3 mile spur trail to Scout Pool on the way back). The Union Falls Trail continues straight another 1/2 mile to a viewing area for Union Falls on the edge of its canyon. At 250 feet, Union Falls is the tallest named backcountry waterfall in the park. It was named "Union" because it is really two falls in one. Two separate creeks come together at the brink of the falls. Water from the eastern creek fans out, forming a delicate veil of water over an ominous rock face, while the northern creek shoots in from the side. Lush, green vegetation and flowers nurtured by the waterfall's spray abound. Do not try to reach the base of the falls; it is dangerous and damaging to the vegetation. Union Falls faces west and does not become illuminated by the sun until late morning. It is therefore best photographed in the afternoon.

On the way back, take a right on the North Fork Trail and follow it .3 miles to a naturally heated swimming hole at the base of a small falls, known as Scout Pool. The North Fork Trail follows Mountain Ash Creek’s large unnamed tributary (the "North Fork"). The easy, level trail ends at the base of a small, 8-foot waterfall. The water in the creek emanates from myriad hot springs flowing out from the base of the Pitchstone Plateau, making it warm enough to swim late in the summer. Just below the falls are several nice soaking spots. When you’ve soaked up enough fun, retrace your steps to the trailhead at Grassy Lake. 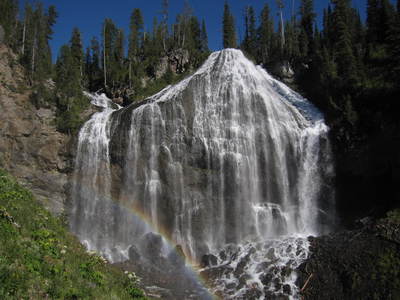 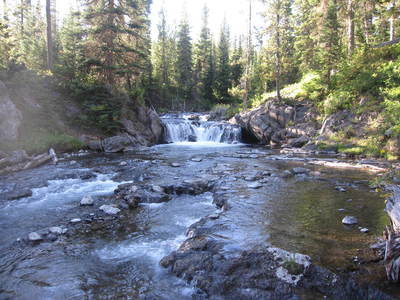 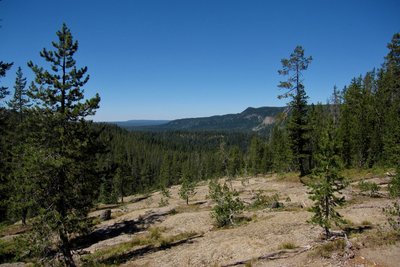 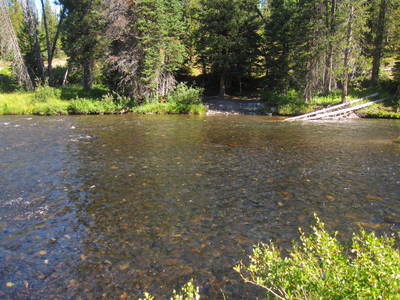 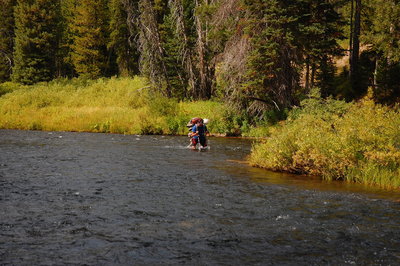 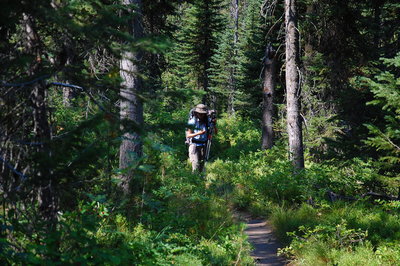