“A one-way trail through spectacular Hayden Valley, past Mary Lake, and out along Nez Perce Creek. ”

This is prime grizzly country! The trail from Nez Perce Trailhead to Mary Lake is closed until June 15 (through travel from the Canyon Trailhead is not allowed). Overnight camping is forbidden anywhere on the trail all summer. Make noise while you're out, and do not travel alone. If you see a bear, stay at least 100 yards away. You'll see buffalo on this trail; stay at least 25 yards away. Buffalo are always dangerous, but by August, rutting season begins and the bulls become extra feisty.

The first half of the Mary Mountain-Nez Perce Trail takes you deep into Hayden Valley; at 23,000 acres it's Yellowstone's biggest meadow. Large herds of buffalo are commonly seen in the valley, as are grizzly bears. The second half of the trail passes Mary Lake, rapidly descends into the Nez Perce Creek drainage, and follows the creek through a chain of beautiful meadows.

You'll need to either leave a car at the Nez Perce Trailhead (between Old Faithful to Madison Junction) or arrange to be picked up at the end of this shuttled route.

The trail travels southwest from the highway paralleling tree line on your right and Alum Creek on your left. Alum is an astringent used to stop bleeding and to make pickles. Early storytellers claimed Alum Creek was so sour it caused horses' hooves to shrink. Unable to continue on horseback, one traveler was said to have carried his four-legged friend many miles. At the conclusion of his journey, he boasted that it hadn't been so bad "because sprinkling alum-water on the trail caused the distance to shrink."

Spectacular Hayden Valley is Yellowstone's largest, unfolding over 23,000 acres. About 14,000 years ago glacial ice near Upper Falls blocked the Yellowstone River’s northern flow, causing water to back up and cover this entire valley. Fine sand, silt and clay accumulated at the bottom of the lake. The glaciers receded and the lake drained, but these deposits were left behind. This poor soil is the reason Hayden Valley exists today. It's also the reason the trail is often swampy, since water has difficulty soaking into the ground. It is named for Ferdinand V. Hayden, who conducted three Government Surveys of Yellowstone and was greatly responsible for its establishment as the world's first national park.

At the 4.2-mile mark the trail crosses good-sized Violet Creek (fed primarily by hot spring runoff from Violet Springs to your left) and begins a gradual 500-foot climb to Mary Lake over the next 6 miles. Mary Lake, a shallow, 20-acre lake, sits secluded among the trees. Mary Lake is barren of fish.

Shortly past Mary Lake, the trail begins a precipitous 950-foot drop over 3 miles. This is the closest thing you'll find to a “mountain” on the Mary Mountain Trail. Thereafter, the trail levels-out and follows Nez Perce Creek through a string of beautiful (sometimes marshy) meadows for the final 7.5 miles. Along the way, you’ll cross Cowen and Magpie creeks and thrice cross Nez Perce Creek. The creek was named for the Nez Perce Indians.

In 1877 the tribe, led by Chief Joseph, followed this creek as they traversed Yellowstone Park on a 1,100 mile fighting retreat, with the US Cavalry in hot pursuit. Near the end of the trail, it passes a number of hot springs in the Culex Basin.

Buffalo, or "bison," are commonly seen in Hayden Valley. Bulls often weigh a ton or more and are the largest land mammals in North America. Both the male and female have horns made of compacted hair around a bony core. Horns are permanent features and are not shed annually like antlers. At one time an estimated 60 million buffalo roamed the American West. By 1890 they were nearly exterminated. Today, Yellowstone is the only place in the U.S. where wild buffalo have persisted since the first white man arrived in the new world. 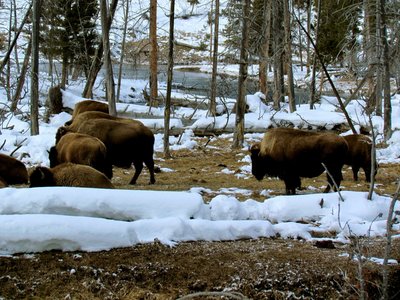 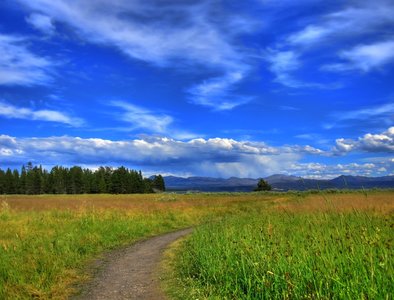 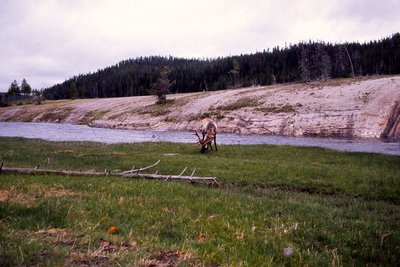 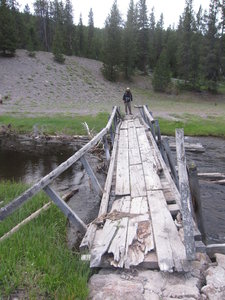 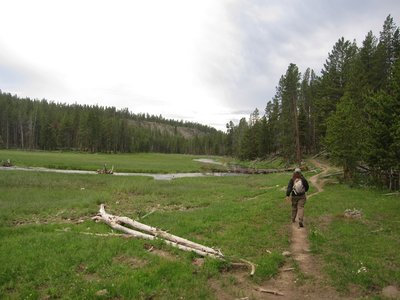