Geyser basin boardwalks and trails protect you and preserve delicate formations. You must stay on boardwalks and designated trails. Scalding water underlies most of the thin, breakable crust. Pools may be near or above the boiling temperature and can cause severe, possibly even fatal, burns.

The trail begins 0.1 miles south of Grotto Geyser. It proceeds past a group of geysers on the left. Daisy Geyser erupts at an angle to a height of 75 feet for 3-5 minutes. Typically, Daisy is quite predictable, with eruption intervals of 110 - 240 minutes.

An exception to this is when nearby Splendid Geyser erupts. Splendid Geyser's eruptions are, at times, over 200 feet in height, making it among the tallest geysers in Yellowstone. Its eruptions are infrequent and difficult to predict except for the fact that it is more likely to erupt when a storm front rapidly reduces the barometric pressure in the area. This slightly reduces the boiling temperature in the plumbing system and occasionally triggers a splendid eruption.

Comet Geyser is a member of the Daisy Group which also contains Daisy and Splendid Geysers. Comet has the largest cone of the three but has, by far, the smallest eruptions. The nearly constant splashing of Comet over a long period of time has resulted in its large cone. Eruptions rarely exceed 6 feet in height.

These geysers may be seen more closely from the boardwalk on the far side. A junction with that trail is just ahead.

Just under 0.4 miles from the start, the trail reaches the Punch Bowl Spring Connector to the unusual Punch Bowl Spring, a frequently visited spot before the highway was converted to a trail. This boiling, intermittent, spring has produced a sinter lip that raises it above the basin floor. That "punch bowl" appearance gave this feature its name.

The trail continues another 0.3 miles through a lodgepole pine forest and ends at the Grand Loop Road and the Black Sand Basin parking area. 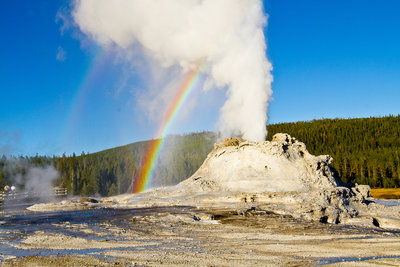 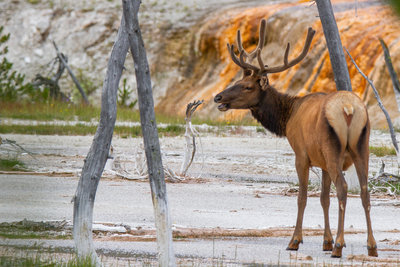 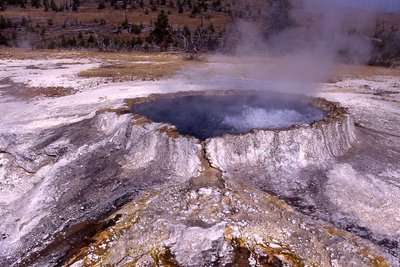 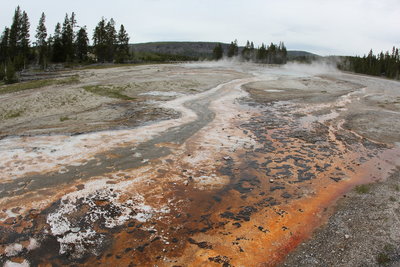