“Enjoy commanding views of Yellowstone Lake, the Absaroka Mountains, and the SE corner of the park. ”

This is bear country. Check with the Rangers before heading out. In August 2015, a sow grizzly with cubs killed a park employee running alone on this trail without bear spray.

This 3.8 mile loop trail climbs 750 feet through a mature lodgepole pine forest to a lookout point with outstanding views of Yellowstone Lake, the rugged Absaroka Mountains, and the entire southeast corner of the park.

A great trail run - short and close to Lake Lodge. You'll have to slow up for two steep sections (one going up and one down). But watch for animals, you do not want to startle a bear or get too close to a buffalo!

The trail briefly parallels the highway south then veers west (right) and enters the lodgepole forest. Enjoy making your way along the shaded path, and take a few moments to appreciate your surroundings.

At the 0.9-mile mark, a trail junction is reached. Both trails lead to the top of Elephant Back. Follow the left trail as it uses five switchbacks to steeply climb 600 feet in the next 0.8 miles. Elephant Back was named by F.V. Hayden in 1871 for its rounded form and almost vertical sides that he believed resembled the back of an elephant. From the observation point at the top (the 1.8-mile mark of the trail) you get a commanding view of Yellowstone Lake. The wooden benches here make an excellent picnic spot. Early explorers were amazed that a lake of such huge dimensions (135 square miles of surface area) could lie at such a high elevation above sea level (7,733'). Today we know that it is the largest lake for its elevation above sea level anywhere in North America.

The lake contains 3 major islands; Stevenson, Frank, and Dot. James Stevenson, a prominent member of the 1871 Hayden Survey, assembled a 12-foot sailboat that he used to reach the island later named in his honor. His craft, which he christened the "Anna" after the daughter of an influential congressman, was the first known vessel to ply the lake's waters.

The rugged Absaroka Mountains (pronounced "AB-sar-O-ka" or "ab-SAR-o-ka") tower above the lake to the east. The high ridge that they form comprises the eastern boundary of Yellowstone. Early maps show these mountains as the "Yellowstone Range," but they were later officially named for the Crow Indians who inhabited this region. "Absaroka" (which means "children of the large beaked bird" in the Crow's native tongue) is the Crow Indians' name for themselves.

When you have finished soaking up the view, continue south along the trail. It quickly loops back to the right (north) then winds its way down the mountain and rejoins the main trail at the 3-mile mark. Turn left (SE) and follow it the last 0.9 miles back to the trailhead.

There is hidden beauty in this forest. Fallen trees slowly rot, returning nutrients to the soil while providing homes for insects and a medium for growth of small vegetation. These in turn serve as food for larger animals. All around you is evidence of life, from the sounds of a Clark's nutcracker "cawing" or red squirrel "chattering," to the mule deer scat left behind along the trail. All life, no matter how large or small, plays an important role in nature's grand, harmonious scheme.

As you make your way through the lodgepole forests, notice instead of a center tap root, lodgepoles' roots branch out just under the surface, making them well suited for Yellowstone's shallow soil. It also causes them to blow over easy. You may also see green growth along the tree branches. This is wolf lichen. Superstitious Europeans ground up wolf lichen with garlic and sprinkled it around their homes to ward off werewolves. It's not known how well it worked to ward off the mythical creatures. 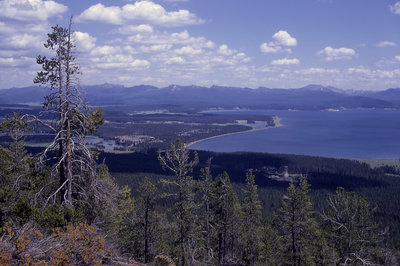 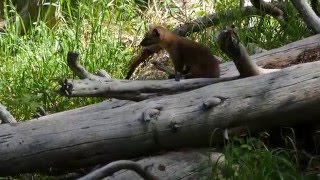