Geyser basin boardwalks protect you and preserve delicate formations. You must stay on boardwalks. Scalding water underlies much of the thin, breakable crust. Pools may be near or above the boiling temperature and can cause severe, possibly even fatal, burns.

West Thumb Geyser Basin overlooks the West Thumb portion of Yellowstone Lake, the largest lake at for its elevation in North America. The basin contains some of Yellowstone’s most interesting and beautiful hot springs, but none of its geysers are frequent or predictable.

The following are descriptions of a number of important features you'll see as you work your way around the basin in a clockwise direction:

Abyss Pool - One of the deeper hot springs in the park, Abyss Pool descends to 53 feet. It varies from turquoise blue to emerald green to various shades of brown. In 1883, a park visitor described it as "a great, pure, sparkling sapphire rippling with heat."

Fishing Cone - Mountain men told of a geyser on the shore of a high alpine lake where one could catch a trout, swing the pole around, dip it into the boiling pool, and cook the fish without taking it off the line. This cooking-on-the-hook feat at Fishing Cone became famous after it was described by a member of the 1870 Washburn Expedition. Visitors often dressed in a cook's hat and apron to have their picture taken at the "Chowder Pot" or the "Fish Pot." Anglers often injured themselves while straddling the boiling water, and their feet damaged the geyser's cone. Fishing is no longer allowed from Fishing Cone.

Lakeside Spring - Its blue-green pool of thermal water drains into Yellowstone Lake. The colors you see in the pools of West Thumb are created, in part, by what grows in these hot waters. Thermophiles have different colors and different temperature requirements. Generally, green and brown indicate organisms living in cooler water, orange and yellow indicate those living in hotter water.

Blue Funnel Spring - This was long known for the distinctive ring of color around its perimeter. However, when Abyss pool began erupting during the winter of 1991-92, the water in Blue Funnel, and in adjacent Perforated Pool and Ephedra Spring, cooled and sank well below the rim. Then the four features appeared to exchange energy: Abyss stopped erupting at the end of that winter, while these features were rejuvenated. 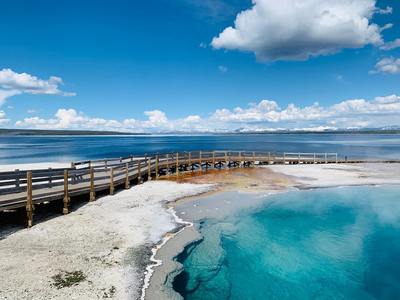 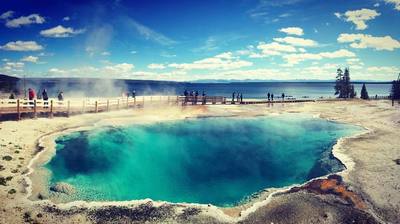 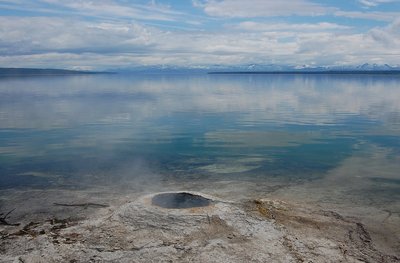 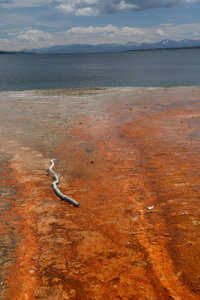 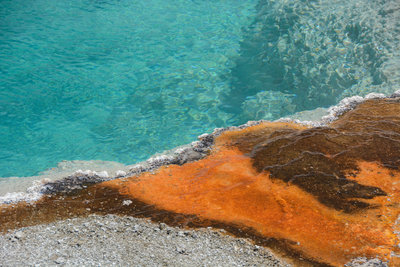 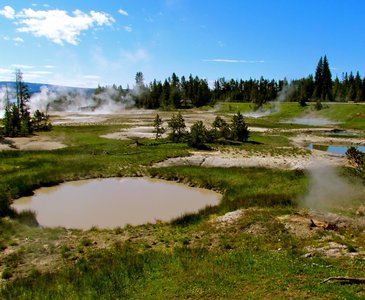