“A fun, technical, yet perilous scramble up one of Colorado's most recognizable 14ers. ”

The trailhead for this run is at Maroon Lakes Campground, which is a popular tourist attraction and thus has a bunch of persnickety red tape. Details can be found here.

Dogs will not be able to make it very far on this particular trail.

Due to steep grades, loose rock, looser dirt, and the fact that this is one of the most lethal mountains in the country, avoid running here, if you're even able to.

While this mountain is regarded as one of the hardest 14ers, many will find its difficulties totally underwhelming. On a clear day it's actually fairly straightforward and short. That said, North Maroon has claimed many lives over the years, including those of many experienced climbers. Don't take it too lightly.

Access to the Maroon Bells visitor site is straightforward, so I won't waste time with that here. To access North Maroon, simply run 1.6 miles up Maroon Snowmass Trail to Crater Lake, which is an excellent camping spot if you're not doing this as a day trip. From here, run about 0.75 miles and look for the turnoff to the left onto this trail, crossing a stream. Continue briefly on a trail before coming to a rock glacier (a talus field) of red rock.

Cross the talus field, staying just above a cliff band below you and to your left as you make your way toward some cliffs. There may be some cairns in this area. Walk south around a cliff corner and regain a clear trail. Run about 100 meters and turn right, heading up some class 2+ rock/grass slopes for 200 ft gain. At 11,900 ft hug the left of some cliff bands and come into a grassy but steep and loose gully.

Follow the trail south into the gully, running alongside some cliffs. Gain 600 ft in the gully. As you get cliffed out at the top, angle toward the left. Regain some solid trail and run 3-5 mins to the second gully (12,600 ft). The route is harder from this point on and requires good weather.

The second gully is steeper and rockier, and loose rocks may come barreling down it at breakneck speeds (wear a helmet). Follow cairns and a vague trail up the gully to rock band at 12,900 ft. These red cliffs are themselves solid, but are covered in loose shale. Scramble class 3 terrain to 13,200 ft to reach the NE ridge.

Scramble class 2+/3 terrain on the ridge crest before reaching a small area of talus at 13,600. The cliff bands right beyond this are the crux of the climb. A small class 4 chimney, 10-12 ft in height, makes for some fun moves. Top out of the chimney and continue class 3 scrambling to a precipice at 13,700 ft. This is a great spot to stop and enjoy the views, although the summit is itself very close.

Once past this point, it's a brief class 3 scramble past some rock bands, and then a mostly class 2+ run up the ridge to the summit, another 300 ft up. South Maroon stands to your south, Pyramid to your east, and Capitol Peak and Snowmass Mountain to the northwest.

You'll never hate mountain goats as much as you'll while on this trail. As you're ascending steep, loose slopes, they will unknowingly kick rocks down at you. Demon spawn. Speaking of evil woodland critters, the lots at Maroon Lake are famous for their porcupines, who love to chew on brake lines. It is highly advised, if overnighting, to wrap your car with chicken wire. Mothballs are a reasonable alternative, but even if you leave them on the ground underneath your car, your interior will probably never smell the same. 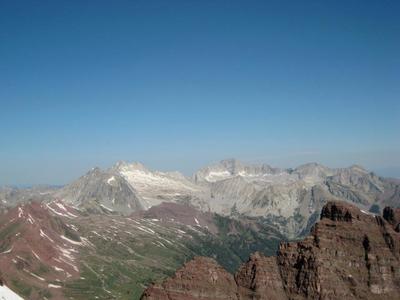 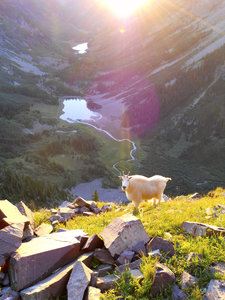 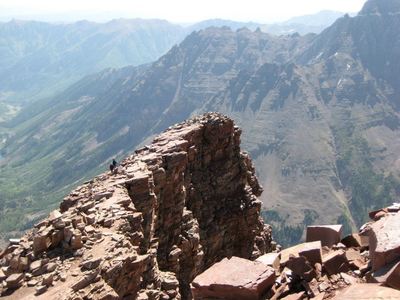 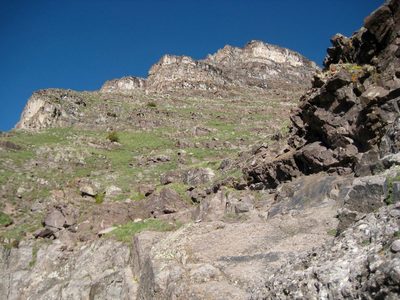 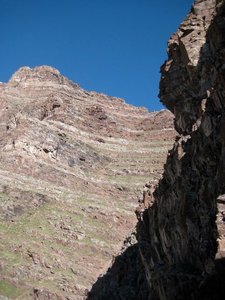 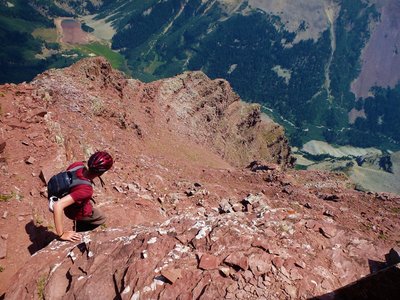