“A rocky run and scramble to the summit of 14er El Diente. ”

Winter access is poor, as the road is generally closed low on Forest Road 535, miles below the trailhead. Dogs will struggle once past the waterfall - coarse rocks make for hurt paws, and class 3 scrambling makes for a stuck hound.

The upper reaches of this trail are rocky and occasionally slick and loose. Approach shoes or hiking boots may be better than trail runners here.

While the first 1.5 or so miles of this trail would make for a nice run through the woods, the rocky trail and scramble beyond does not. A trip to the waterfall from Kilpacker Trail would provide a nice run with awesome views and a reasonable distance.

From the turnoff of Kilpacker Trail toward Navajo Lake Trail, stay right and continue through the forest. In about 0.5 miles, cross Kilpacker Creek. Run through the trees and come to a meadow around 10,800ft. The trees thin out here, and El Diente becomes visible. Below it is an immense talus field and a stunning waterfall to the right of the trail.

Follow the trail onto the talus field. From here on out, it's all rock. Run up to a patch of spruce trees at 11,100ft. Pass through them and continue on the talus. Near 12,200 ft, pass over a large "bump" of talus. Angle to the left and onto the upper talus field below El Diente. Kilpacker Creek runs down to your right and feeds the waterfall you saw earlier.

From here, the route finding difficulties begin. The summit of El Diente is clearly visible up and to the left, and it's not really all that hard to simply scramble with reckless abandon to the top. Simply climb up reasonably solid class 3 rock up toward a class 3 gully below and to the right of the summit. If you're comfortable making your own route, this is an excellent alternative to fretting over the exact intended method.

For those who want to physically easiest route, your goal is to find breaks in the cliff bands. Head up on the talus between the first cliff band, then angle right for the notch in between the second. Now you must work your way back to the left toward the summit. Aim for a red rock rib at 13,500 ft. Pass it, turn right up a gully, and head up to the bottom of a cliff formed by the "organ pipes:" you guessed it, rocks that stick up kind of like organ pipes. Traverse to the west, gaining ground by heading up any gully you see until you get cliffed out. You'll hit the summit before you know it.

Above 13,500 ft the rocks are loose everywhere. The gullies are unpleasant; it's like walking on a pile of broken dinner plates. In all honesty, it's not that hard to find your own way to the top. Just pick your lines carefully and stick to the most solid rocks you can find.

Once at the top of El Diente, continue across the Wilson Traverse to reach Mt. Wilson, or head back down.

After coming out of lush forests, expect to be on the rocks for quite some time. There's nothing in that area but pika and marmots, although the waterfall at the lower reaches of the talus field is stunning. 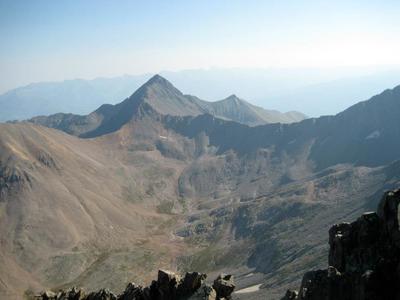 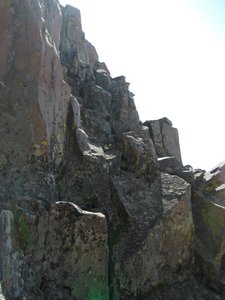 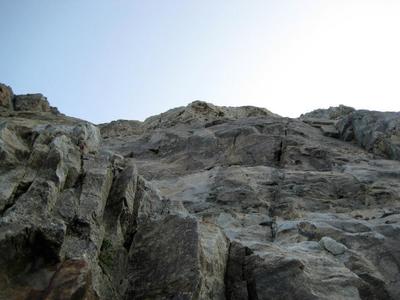 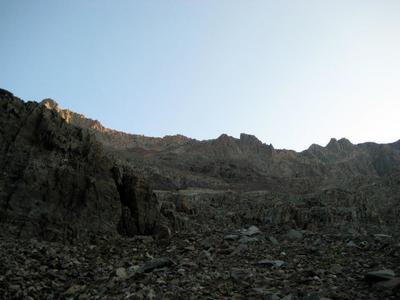 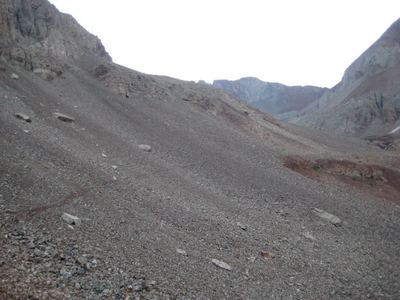 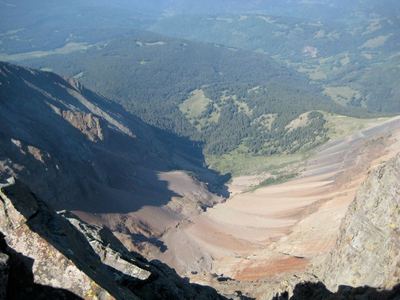