The Mariposa Grove is the largest stand of giant sequoias in Yosemite. It is also the most accessible of the three groves in the national park. This is a wonderful place to run on wide, shady paths while gaping at the towering behemoths all around you. Many of the iconic trees have been named, and it is almost like a treasure hunt to try to visit them all. The trails through the lower grove that are closest to the parking area receive the most traffic so if you're looking for more peace and quiet, head uphill to the even more scenic upper grove.

Informative signs explain the fascinating lifecycle of these trees and the history of this area. Extensive clear cut logging operations almost doomed these trees. We have early conservationists to thank for their existence today. Giant sequoias are the largest species of trees in the world by volume. An average giant sequoia can grow to be a thousand years old and more than twenty feet across. These unique trees grow only in California on the west side of the Sierra Nevada Mountains and only between 5,000 and 7,000 feet in elevation. There are not many of these trees left in the world, so don't leave Yosemite without paying them a visit.

Short Run: The road to the Mariposa Grove is not plowed in winter and is often closed to cars (but not to runners or skiers) from approximately November through March/April depending on the snowpack. 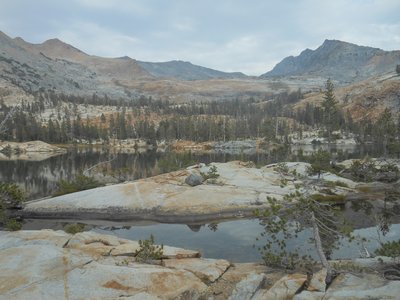