“From its industrial pioneer beginnings to its reclaimed wilderness of today, Marble Rock is a runner's paradise. ” These recreational trails are rustic and considered difficult due to frequent climbs and rocky footing. They were developed by members of the Rideau Trail Association, with the cooperation of the Cataraqui Region Conservation Authority, and are maintained for public use.

Start your trek at the off-road parking lot at the Trailhead on the north side of Marble Rock Road. Two connected loop trails provide a seven or eleven kilometer running experience that will take you through a wide range of geology and fascinating ecosystems, with many cliff-top lookouts over lakes, swamp, grassland and forest habitats.

You might see deer, otter, beaver, blue heron, grouse, frogs and wild turkeys along the trail. Some areas are popular with rock climbers and it is a prime geocache site as well. In the winter, much of the trail is ideal for snow shoeing, making this a year round outdoor paradise tucked in next to the Gananoque River.

This trail is a lengthy loop, so make sure you're prepared. In particular, the region is rocky and hilly and the sun goes down early in the winter. It's very easy to lose the light! The footing is uneven, although it's not particularly difficult, just a long loop. The eastern side of the loop is a little bit more difficult than the western side.

Take South Loop Access from the parking lot to access this trail. Before you get to the South Loop proper, take a quick detour up Leaning Rock Lookout Trail for a great vista. This trail passes through boreal forests through terrain known as the Canadian Shield, and the rocky formations are evident throughout the trail. At the northernmost point in this loop, you'll see a beaver lodge that has created an artificial lake, along with other beaver activity in the area. Be sure to stop at the South Loop Lookout which makes for a nice rest spot.

Continue onwards. There will be a fork in the trail. Take the right one to connect up to the North Loop. If you're feeling tired though, you can skip the North Loop and cut back early. Even without the North Loop it's still a long run. There's a nice lookout point on the eastern side of the North Loop.

When you finish the North Loop, you'll connect back with the South Loop trail and turn right (southwest). The next segment of the trail is a bit flatter and you'll eventually come to some wetlands area along with some ruins of the old community. Use the South Loop Access to return to where you parked.

The diversity of the biosphere is evident at Marble Rock Conservation Area which is rich with flora and fauna. Deer, otter, beaver, blue heron, grouse, frogs, interesting insects and wild turkeys can be seen along the trail. Wildflowers, fungi, mushrooms, lichens, mosses, ferns and many species of trees including mature birch are sights to be seen throughout the conservation area.

The hamlet of Marble Rock was named and settled by English pioneers in the early 1800's, but the area was traversed by aboriginal peoples long before that. In its day, the community thrived, consisting of a store, tavern, post office, saw and grist mills, cheese factory and a school. Throughout the area's history, several industries thrived near Marble Rock. Logging from timberland upstream sent logs down the river and over the dam to be cut up at the sawmill and loaded onto barges for delivery. Mining and quarrying also flourished. Paving blocks were expertly cut and shipped by railcar to be used to pave around city streetcar tracks. During World War II, quartz crystals were excavated by hand from the hillsides to fill the huge demand for electronic equipment. 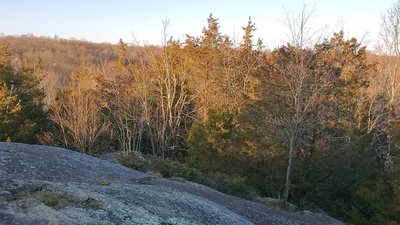 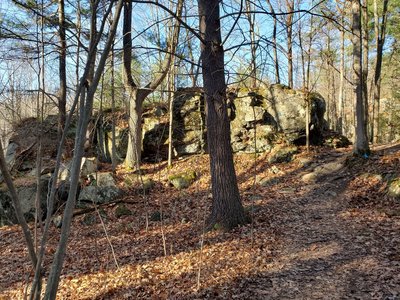 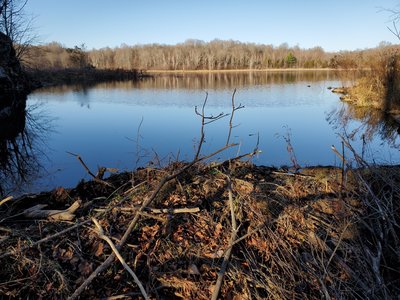 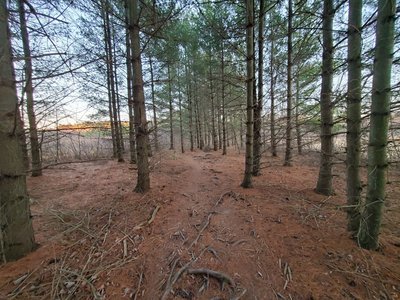 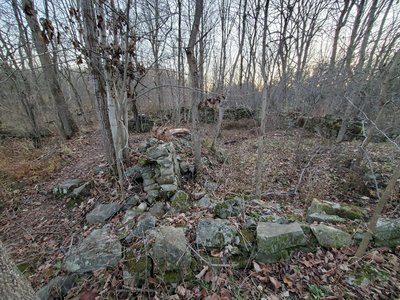 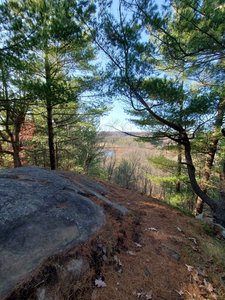