“Escape the city without leaving the city. ” 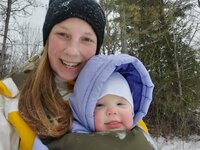 Run through trails along the waterfront of Kingston's Cataraqui River. You'll see plenty of wildlife, heritage buildings and sites, and even a hidden beach.

Park in the parking lot, and take the Waterfront Pathway / K&P Trail north.

You're currently in Douglas Fluhrer Park. Enjoy the urban art murals to your left. This is a turtle nesting grounds, so depending on the season, you may see turtles on the lawn, or turtle nests. This park is also very popular with waterfowl, so you'll see plenty of Canadian geese and Mallard ducks nearby. There are several benches and a few picnic tables in the area, popular for feeding the ducks.

Head north a little and the path veers to the right. Keep your eyes on the water. In this area in the summer you can frequently see turtles basking, and there's a sign about turtle identification. Other animals, including snakes, frogs, and waterfowl can also be found here.

On your left the big building is the Woolen Mill, which was built in 1882 and now houses various businesses including a climbing gym. You can climb inside the 100-ft tall chimney!

The path follows the waterline and veers back left. Here, there are some launch ramps for canoes and kayaks, rowing, and dragon boats. The area is also home to a family of groundhogs.

Keep following the path. There's a brief section here where you're on the sidewalk next to a road and you might feel like you're in the wrong place, but this is only a few short blocks. Then you'll see some paved pathways heading north, along with some signs for the K&P Trail. This is K&P Trail (Urban Kingston Segment).

Follow the trail north for a little under a kilometer. There is a creek to the east in which frogs make their home. Sometimes they can be quite loud. There's also a lot of wildflowers that grow in this section. You'll get to a fork in the path, and the paved section veers left - this is K&P Trail (Urban Kingston Segment), but we want to go right towards Belle Park Loop.

Belle Park used to be a golf course that has since been decommissioned. It's city-owned land, so you can wander across the fields on your left if you are so inclined, but for now, we are going to follow a wide gravel path. This is actually a service road, and is popular among joggers and cyclists, but it's rare to see motor vehicles.

After a little while, there'll be a small path to the right. Take that, it leads to a nice lookout and off the service road. In the little bay area you can see a beaver lodge if you look for it. You can continue to follow the small path or return to the service road as you continue heading east. You'll come to a small bridge with a gate and a sign indicating that you are entering Belle Island.

On Belle Island, there is only one trail and it becomes a singletrack, this is Belle Island Trail. Watch for wild parsnips off the trail. The rest of the island is forested and deer are known to live there. Follow the track for 500m and you'll get to a small clearing with water access.

Lots of ducks and geese, occasional swans, herons, and other waterfowl. Turtles are often seen basking on logs, and frogs and snakes may be seen nearby. There is a beaver lodge just to the south of Belle Park, and deer live on Belle Island. 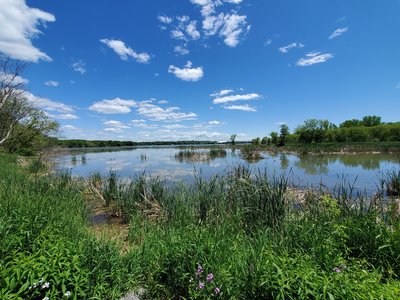 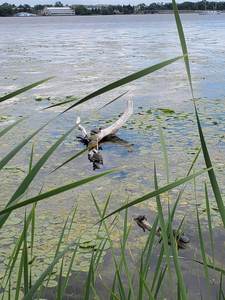 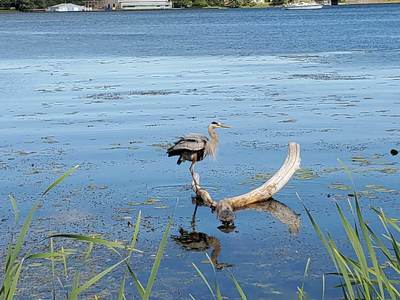