This is a trace in Addicks Reservoir that is not maintained. Please comply with Corps of Engineer's regulations by not disturbing the ground or vegetation. Vehicles are prohibited. Please refer to the "Addicks Reservoir" page for area-wide information.

This is a natural-surface path through the trees, and a portion of it is covered with pine needles. In terms of elevation, it is lower than Kobs Trace which in turn is lower than Plummer Trace. Accordingly, it has several low spots that remain wet longer than the other two to the west. The prevalence of pine needles means the trail is rarely muddy, even when running through 1-4 inches of ponded water. When the area is dry, this trace makes for a nice loop run when combined with Kobs Trace or Plummer Trace.

Users should always be prepared for mosquitoes.

The trace begins on Patterson Road about 600 feet west of North Eldridge Parkway. The entrance to the path is right across the road from the yellow flood gauge. Yellow tape blazes on the trees mark the route. Note that Patterson is used by motor vehicles as a high-speed road. Sight lines are good at the entrance and traffic is generally light.

At Lamb Trail, the trace jogs east for about 50 feet before continuing to the south. There are two marshy areas on this segment, one about 150 feet in and the other about 750 feet in. The path ends with an intersection with Kobs Trace.

In winter, mushrooms are common. 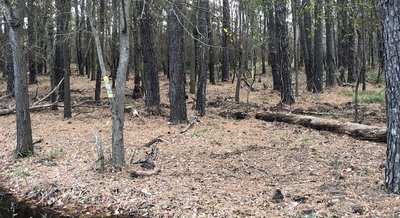 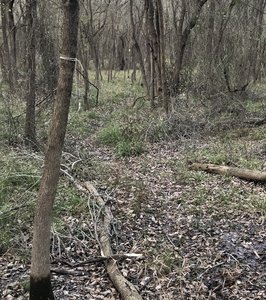 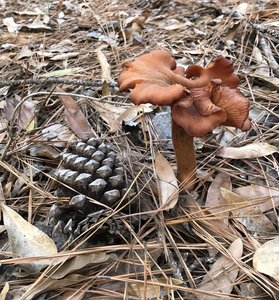