“Two loops that can be completed separately or together. ”

This is a combination of two loops with a long connector trail in between them. When done together (and in the right season), you get lake views, stream crossings, swamp trails, wild berry bushes and bucolic old farm fields.

There is a $5 parking fee, at the moment the restrooms are closed due to Covid and the Nature Center has a store (outside at this point in time), with drinks and food.

The run starts behind the Teatown Reservation main building. Look for the trail heading downhill with the blue blazes. Following the Lakeside Loop Trail (blue blazes), you'll start to see lake views on your left and will eventually pass a boat house. Keep the lake on your left as you follow the trail north until the trail takes a hard left turn at the top of the lake.

Follow the blue blazes until you come to a post marked TKT (Teatown-Kitchawan Trail), turn right here and follow the TKT. This trail will take you alongside a stream with slight waterfalls (in the right season), and into Griffin Swamp. Follow the TKT for a bit more than a 1/4 mile until you come to the junction of the Briarcliff-Peekskill Trail (green blazes) where you'll turn left to run along side Griffin Swamp. After crossing a bridge over a stream you'll continue straight onto the Cliffdale-Teatown Loop (blazed in yellow).

Follow the yellow blazes on this lonely trail. Be on the lookout for seasonal wild berries and widow makers (loosely hanging tree limbs that can fall due to wind). This trail is slightly less than a mile in length. At the west end of the trail you come upon the Cliffdale Loop Trail.

I choose to turn right onto the Cliffdale Loop (orange blazes) because in this direction there is only one major descent instead of two.

Turning right, follow the orange blazes and the arrow markers, first onto a stony path, then right again into a short forest trail. As you come out into a meadow you'll be directed to turn left, and then a few hundred feet later left again. The trail re-enters the woods and twists and turns around trees, rocky outcrops and old stone walls until it comes to Teatown Road. You'll turn right onto the road and run maybe one thousand feet until the trail picks up on the opposite side and brings you back into the woods and the first of two inclines.

Follow the orange blazes and go pretty much straight up the incline. At the top the trail levels off until you come to an extremely steep descent. At the bottom of the hill the trail continues on over two more streams before you come to the final incline which features a switchback. At the top of the hill you'll be rewarded for your climb with an extremely pretty old farm field.

Follow the trail across the field and to the left which will eventually bring your second Teatown Road crossing. Cross the road and follow the trail into the Cliffdale Farm proper. The trail will cross two more fields before you complete the loop and come back to the Cliffdale-Teatown Trail. Here you'll reverse course heading east on the trail, entering Griffin Swamp, taking the Briarcliff-Peekskill Trail and then the TKT back to the Lakeside Loop turning right onto it.

Follow the blue blazes keeping the lake on your left. On this portion of trail there are multiple scenic rest areas culminating with a boardwalk crossing the southern end of Teatown Lake. Keep following the blue blazes until you pass through the wooden deer gate, then turn right onto the white blazed connector trail which will take you back to the parking lot.

The Teatown is a private nature preserve and education center. I strongly suggest visiting their website. teatown.org/ 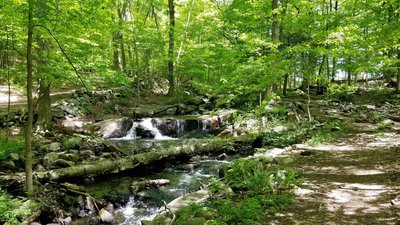