“The Aphrodite Trail, situated in the Akamas State Forest, begins at the famous Baths of Aphrodite. ”

The trail is circular and for about 2.5 km coincides with the Adonis Nature Trail, up until the historical location of Pyrgos tis Rigainas (Tower of the Queen). This section of the trail is rocky and on an uphill slope. According to local legend, this is the route that the Cypriot goddess, Paphia Aphrodite, used to follow, after taking her bath, to reach her tower and rest under the huge oak tree that still exists today.

The trail then continues in a northwesterly uphill direction until Moutti tis Sotiras, where it follows a downhill route toward the Baths of Aphrodite.

Along the trail, you'll find points of interest relating to local plants, shrubs and trees (e.g. lentisk, wild sage, Cyprus golden-drop, strawberry tree, juniper) and to geological formations, such as limestone layers (kafkalla) and serpentinites. The trail also includes a stone water fountain and drinking water springs (one near the ruins of Pyrgos tis Rigainas and one between Baths of Aphrodite and Kakoskali).

There is a café-restaurant and kiosk in the Baths of Aphrodite area, where you can enjoy the Cypriot cuisine, rest and get information about the Akamas Peninsula. You also have the opportunity to walk around the small botanical garden that holds specimens of the peninsula's rich flora.

Fauna: The main species of fauna found in the area are:

The forest serves as a resting point for many migratory birds. 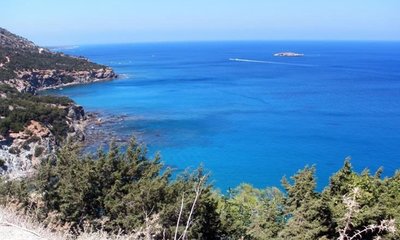