“Lightly-traveled loop near a swamp with flat terrain. ”

Poorly traveled, poorly marked, and trails in the vicinity are closed.

Louisville Swamp is very poorly marked, and I saw trails that were not described on the map. There are also trail closures due to flooding deeper into the park. Exercise caution when running in this area and make sure someone knows your plans and when to expect you back, especially in the winter.

This three-mile loop is fairly straightforward, but a wrong turn could put you on a much longer run that might not loop back up with your trail.

There are no facilities at the trailhead, and there are no establishments in the immediate vicinity. Accessible in winter.

Based on the condition the trail was in when I went, I would not recommend running this route in the winter. It's probably fine in the summer.

From the trailhead, take the trail by the far end of the parking lot by the information boards. Follow the trail and don't take any turn-offs. You'll come to an intersection with a sign that will say that straight/left is a longer loop and right is a shorter loop. Take the right turn.

Follow the trail past the swamp until you eventually get to a road, and then take another right turn. The road will meet back in a different part of the parking lot than you left, but you'll be able to see where you are. The trail was lightly traveled, so gators were warranted, even though when I visited it had been more than a week since the last snow. I also wore ice grippers, which were useful on the road portion (and through the parking lot!), which had some ice.

When I visited in early February 2020, there were very old signs saying that Mazomani Trail was closed, Jab's Farm was inaccessible, and one other trail, I believe the trail that connects the larger loop around the swamp along the river, was closed. I have heard from another runner that this is due to flooding, which has not solidified yet this winter. 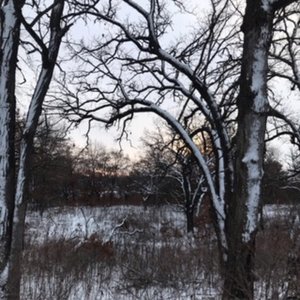