“A nice and easy loop through the fields and forests of Grand Ravines with access to the 75-foot-high suspension bridge. ” Grand Ravines is an award-winning stretch of 202 acres that has been deemed one of the most significant natural features along the Grand River corridor through Ottawa County. With easy access off Fillmore Street between Lake Michigan Drive (M-45) to the north or I-196 to the south, this natural oasis lies within a half-hour drive of downtown.

This loop run provides a complete tour along the natural and paved trails from the southern parking lot out toward the Grand River and back along the Ravine Overlook and West Ravine Trail with the only overlapping section on the Greenway Trail Route.

No horses. Bikes allowed on paved trails. For visitors sensitive to heights, the suspension bridge can be bypassed by heading along the western half of the Main Paved Loop (clockwise) to connect with the Natural Surface Loop toward the Statema Woodland Trail.

From the southern parking lot off Fillmore St by the fenced dog park, this loop run heads counter-clockwise starting along the Main Paved Loop for a nice warm-up to stretch your legs. After a few hundred yards, at the far end of the field, stay to the right as the path ducks into the woods to cross the suspension bridge, which spans 275 feet across one of the namesake ravines.

In the warmer, summer months, this is an awesome vantage point to explore the dense foliage from, giving an almost birds-eye-view of the canopy and ferns along the forest floor. Not to mention a great example of a suspension bridge for anyone interested in structural engineering on a more human scale.

On the far side of the bridge, head right (east) along the Natural Surface Loop to begin the wooded section of trail along the Statema Woodland Trail as it slowly descends toward the Grand River. Stay to the right at all intersections to head out on the Greenway Trail Route spur to the easternmost boundary of the park.

From here, head back along the greenway, this time staying right to loop up and around the Grand Ravines Lodge and parking areas on the Idema Explorers Trail: Grand Ravines Segment. Just before the two-mile mark, visit the Ravine Overlook platform for another nice spot to take in the surrounding natural area.

Continuing south, you can follow the Aldrink Path on either side of the road as they both meet at the West Ravine Trail for the final bridge back toward the Main Paved Loop and southern parking area.

The park's 202 acres were combined from four main parcels of land along with donated easements for crucial trail connections. The first was the Timmer Farm, which was acquired in 1999, the second was a riverside private residence purchased in 2011, the third was used to establish the John J. Helstrom Natural Area, and the last donation was in early 2019.

Major construction and improvements have been underway since 2015, culminating in an Mparks Park Design Award in 2018. See this article for more information on the history and improvements done at Grand Ravines. 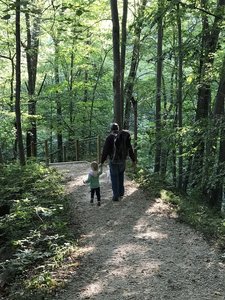 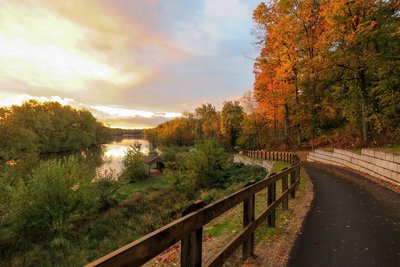 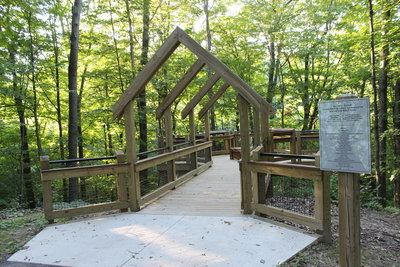