This trail is best undertaken in Austral summer when conditions are more stable and snow is not obscuring the trail. Spring can be dangerous due to melting snowpacks during the steeply graded segments of the run. Trekking poles may be helpful, especially if carrying heavy packs.

The end of the trail circles around an active dirt bike facility. Caution is recommended.

If you do not have a guide, you'll need to arrange a vehicle or call a taxi, as this trail ends some distance away from town.

A common exit used for those running to Laguna del Caminante from the Andorra Valley, Cañadon de la Oveja takes a higher, mountainside route back to the far side of Ushuaia near the entrance to Tierra del Fuego National Park.

The run out from the laguna winds across a steep grassy mountainside, passing a sign indicating the split in the road with an arrow pointing towards Cañadon de la Oveja. This marshy trail circles around to the right until you reach a stream that will guide you up towards the saddle between the mountains. This portion of the trail will likely be riddled with muddy stretches and unstable footing.

At around 1.5 miles into the run (2,200-foot elevation), the vegetation drops away and you'll find a hard slate to be underfoot for the next 4 miles. You'll find a grand snow-capped mountain panorama behind you before the trail winds its way in between the two peaks.

The trail may or may not be easily visible as you ascend to the highest point over the next 0.5 miles. Once you make it up to the highest point, you'll descend 700 feet over the course of a mile back down to 2,000 feet before the trail levels off and wraps around to the left. Periodic rock piles may hold a trail marker if you are lucky, but keep your map handy (although the only way to go is up and over).

This leg of the trail skirts along the side of the mountains behind Martial Glacier, well above the valley floor with an incredibly narrow path, but an amazing sweeping vista. Winds are sporadic and can be violent as they sweep up from the valley below, and the steep 50+ degree drop-off is an unforgiving accident waiting to happen for those that do not watch their steps. You'll continue along the mountainside for 2 miles before rapidly descending using a switchback into the forest.

From mile 5-7, until you exit the valley, the path is relatively easy to follow with frequent markers; however, fallen trees and mud often cause runners to forge new paths around and can extend the length of the trip unexpectedly.

Leaving the valley can present some issues as the official trailhead ends at a horse gate that is still a mile from a road. Once you exit the gate, you'll reach a Y in the trail, where the left branch will be the safest and most expedient path out.

Beautiful cushions of Benthamiella patagonica (green with yellow flowers) can be found, along with other rare hardy greenery native to the Magellanic subpolar forests. Azorella compacta dots the path, thickly covering rocks to make them almost look like green coral reefs.

For those interested in carnivorous plants, keep your eyes peeled for the Drosera uniflora and its deep red hues. This plant supplements its diet by secreting a syrupy mucilage to trap insects.

For the foragers out there, Cyttaria darwini (Darwin's fungus), is of the most commonly found [edible] fungus in Andean-Patagonian forests and has historically been a staple for indigenous people. Since this round, bright orange fungus is known to mature in spring and summer, you are likely to see plenty dotting the trees and ground.

You may encounter wild horses along the way, but will likely only see them grazing on viewable mountainsides. 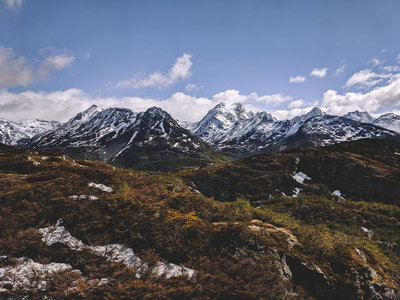 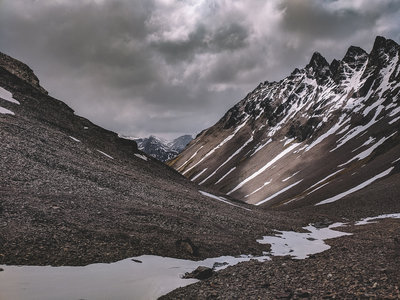 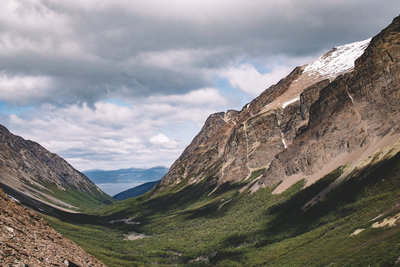 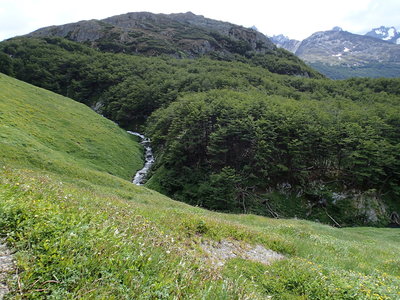