“Breath-taking views, lots of flowers, orange and golden rocks, great campsites; it does not get any better than this. ”

Overnight trips require a wilderness permit. Quota for trailheads (reserved-walk-in): High Trail 20 (12-8), River Trail 30 (18-12). These are very popular trails -- make reservations well in advance at: recreation.gov. Select Inyo National Forest Wilderness permits. Walk-in permits issued starting at 11:00 AM the day before your trip. They can be obtained at the Mammoth Lakes Visitor Center or the Mono Basin Visitor Center in Lee Vining. No permit required for long (15-mile) runs.

This is one of the top trails in the entire High Sierra. When I want to introduce relatives or friends to the High Sierra, this is where I take them.

For almost the entire distance, there are breathtaking views across the San Joaquin Canyon of the full length of the Ritter Range. Mt. Ritter, Mt. Banner, and the Minarets dominate the view throughout, but the views looking north in the direction of Thousand Island Lake and Mt. Davis are colorful and spectacular. The are also more distant views down the canyon of Mammoth Mountain, the Mammoth Crest, and the Silver Divide.

The terrain is mostly open meadow, but with frequent stretches of red fir and adder. Many creeks come down from the north-east slopes and each provides displays of wildflowers that are so beautiful, they seem like a giant version of the color bowls that you buy from a nursery. Outcrops of gold and orange metamorphic rocks add to the colors. Many of these outcrops can be used as spectacular campsites.

The initial climb from 8,300 to 9,700 feet is fairly stiff for beginners, but most 8-mile runs into the High Sierra are more difficult, and few are easier. You can return from Thousand Island Lake via the River Trail, which is almost entirely downhill, except for a 300-foot climb at the end to get back up to Agnew Meadow. I don't think there is another 2-3 day run in the entire High Sierra that provides more scenery with this amount of effort.

If you arrive before 7 AM, you can drive to the trailhead in Agnew Meadows. You'll be charged $10 on exit, assuming you leave when the Minaret Road entrance station is open. If you arrive after 7 AM, you must take the shuttle bus. If you have exact change, tickets can be purchase from the driver for $7. Otherwise, they can be obtained from the Mammoth Mountain Visitor Center. The first bus leaves at 7:30 AM.

You cannot camp near the outlet of Thousand Island Lake. Campfires are not allowed at Thousand Island Lake or above 10,000 feet. They are allowed for most of the distance on the High Trail and the River Trail. Campsites on the River Trail can be crowded, as fishermen often have gear brought in by pack trains. Campsites on the High Trail are not heavily used.

The trailhead is across from the first parking lot in Agnew Meadows, just past the pack station, about 0.2 miles from the shuttle stop. The first 3 miles of the trail are a moderately steep climb from 8,360 to 9,690 feet. In the early season (as late as August 1st in 2019), there are numerous small stream crossings and several places with water running down the trail. This is no problem if you have waterproof boots, but otherwise, your feet will get wet.

The trail starts by switchbacking for about 0.6 miles, through a red fir forest, up a draw created by several small creeks. It then traverses a very green and flowery open area. At 1 mile, the trail leaves the draw, and we get our first views across the glaciated canyon on the San Joaquin River. Much of the Ritter Range is already in view. Mt Ritter and Banner Peak dominate every view throughout the region.

Looking down the canyon, you can see Mammoth Mt., the Mammoth Crest, and the Silver Divide. At this 1-mile point, we come to the first of the rocks to the left of the trail that have level areas that can be used as spectacular campsites. There are several more of these scattered along the next 3 miles. Campfires are allowed for the first 5 miles, and, at least until mid-season, fresh water is never very far away

From the 1-mile point, the trail climbs through the forest until about the 3-mile point, where it comes to a vista point directly across the canyon from Shadow Lake. Shadow sits in a U-shaped hanging valley carved by a tributary glacier. At this point, the San Joaquin Canyon, carved by the main glacier, is 700 feet lower. You can see and hear the large stream cascading down from Shadow Lake. The Minarets are just coming into view. Lake Ediza is hidden in the back of the valley behind Shadow Lake.

The main climbing is now behind us. From here, there are ups and downs, but a total of only about 500 feet of climbing. For the next 2.5 miles, the trail traverses open areas with low, deep green bushes, plenty of flowers, and spectacular views the entire way. Looking up the canyon, Thousand Island Lake is hidden by small rounded domes at the end of the canyon. You can see the complex terrain that the trail needs to cross to get there.

At 5.4 miles, we come to the junction with the trail going to Summit Lake and Agnew Pass. Although it is slightly out of the way, there is a great group campsite on rocks above the south end of Summit Lake. It has views down the entire length of the canyon and on to the mountains beyond. However, the High Trail takes the left fork and drops down 200 feet over the next 0.7 miles to where it crosses the trail that connects Agnew Pass and the River Trail. This is probably mostly used by pack trains. The High Trail makes a gentle climb up to Badger Lakes. The trail to the largest Badger Lake is unmarked, but obvious. That lake has a quiet, pleasant campsite.

About 0.2 miles from Badger Lakes, we come to a trail coming from Clark Lakes. In another 0.4 miles, we pass the River Trail and begin the 200-foot climb to Thousand Island Lake. Most of the climbing is in the first 0.5 miles. After that, the trail follows a tiny stream to the San Joaquin River, just below the lake. The official source of the San Joaquin River is a permanent (at least before climate change) snow field above the longest of the stream flowing into Thousand Island Lake. It is 369 miles by river from there to the river's end in the San Francisco Bay.

The rail starts though a red fir forest. After that, there are scattered groves of quaking Aspen, lodgepole pine, and red fir. Open areas have low shrubs, including bitterbrush and willows and a wide variety of colorful flowers, including tiger lily, larkspur, lupin, Lobb's buckwheat, horse mint, banebarry, wooly mule-ears, and monkey flower. 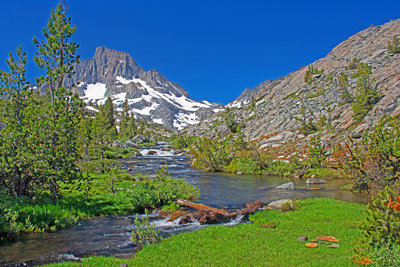 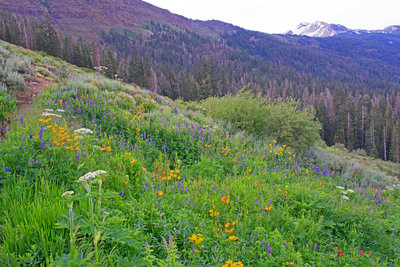 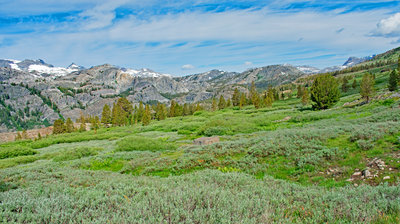