“Circumnavigate and ascend the most immense rock formation on the American continent. ” Though Aconcagua is more frequently done as an out-and-back, ambitious adventurers can make a more complete tour of the mountain on this run.

You'll need to apply for a permit in Mendoza: formulariosambiente.mendoza….

Many folks use the mule teams that are there to support ascents.

The high season for ascents are January, February, and March.

Water is available for most of the trek and should ALWAYS be treated. Human waste is a big issue and you should assume the water is tainted.

You can run it if you're as much of a badass as Sunny Stroeer - nationalgeographic.com/adve….

Even though the trail starts at a relatively mundane 8,000 feet, the crux of the ascent is altitude. For most parties, this involves acclimatizing by ascending to upper camps and then descending again. So this will be a general description of the path and not an accurate representation of how you would make this trek. Most parties making the 360 route take two weeks from start to finish.

The 360 degree route starts in a lower valley and has a slower build up to the more extreme altitudes. You start out from the town of Punta de Vacas and head up between the steep walls of the Valle de Vacas (Valley of Cows).

This valley is characterized by an even, slow climb. Over the first 18 miles of the trail, you only gain a little over 2,500 feet of elevation. In this time, you are confronted by the starkness of the landscape. It feels like a strange combination of new, recently carved terrain and ancient. In the creeks, you can hear large rocks being pushed by the waters.

From the Casa de Piedra, you head up the valley that is framing the mountain. The trail rises more steadily, gaining 3,000 feet in the next 7.5 miles before you arrive at Plaza de Argentina. This is the last big camp with well-developed facilities for medical checks, etc.

The next 6 miles gains 5,000 feet with three camps spotted along the way. The last major camp before the summit spur is Camp Colora. The altitude at this point is close to 20,000 feet, so the going is slow.

From Camp Colora, you make the summit and then most folks head all the way down to Plaza de Mulas. This requires a 6-mile day where you lose around 8,000 feet of altitude.

With dreams of high-fat, fresh food, most folks power back the 17 miles through the Valle de Horcones and head to Mendoza. After arriving in the town of Horcones, completists will run the final 7 miles back to their starting point of their trip.

Some of the bigger animals on Aconcagua include guanacos (a type of llama), condors, pumas, foxes, and viscachas (a sort of rat/bunny).

Most of the vegetation and birds are concentrated below 13,000 feet around vegas (a low-lying fertile area near water). Some of the vegetation includes yellow firewood, goathorn, and yareta (a funky clumpy alien plant).

The name 'Aconcagua' comes from the Quechua "Sentinal of Stone."

The first ascent was achieved by Swiss Matthias Zurbriggen in 1897.

In 2018, Sunny Stroeer was the first woman to circumnavigate and summit Aconcagua in a single push of 47 hours and 30 minutes.

In 1985, the mummy of a sacrificed Inca boy from approximately 1450 was found frozen on the mountain. 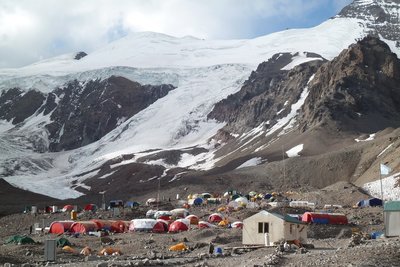 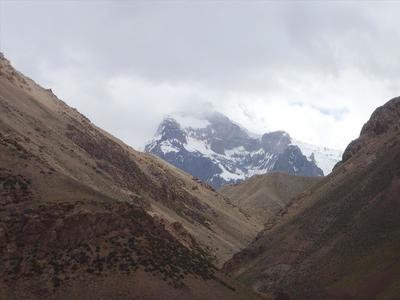 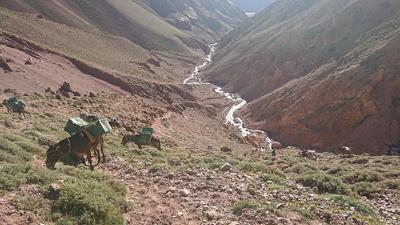 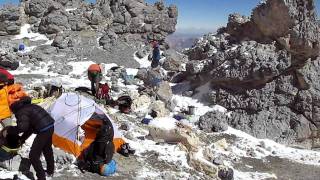 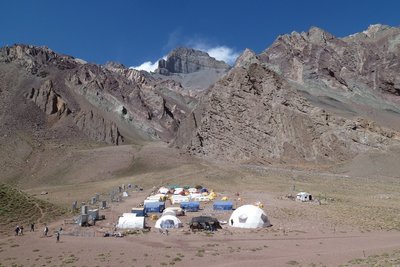