“A challenging backcountry trail that is worth the effort to reach the summit. ” There is a lake to cross which must be sufficiently frozen before use in winter.

In winter, a fully serviced chalet is open. Trail fees are required for use of ski and snowshoe trails as well as the huts. In summer, permission from Birch Brook should first be obtained before venturing onto the backcountry trails.

There are obstacles all along the trail. It would not be suitable for running.

In 2002, Captain Colin Sonoski and Captain Juli-Ann MacKenzie of RCAF 444 Combat Support Squadron, 5 Wing Goose Bay, lost their lives when their Griffon helicopter crashed during a search and rescue mission. Colin was an active Birch Brook member and volunteer, and those who knew him were devastated.

Colin's Hut was erected in tribute and then an access trail was made. It's appropriate that the trail is a challenge to ski and run.

Start from McLean Lake Cabin and expect a steady climb with some reprieves along the way. It is a difficult trail to keep groomed, so there are often true backcountry ski and snow shoe opportunities to Colin's Hut and beyond in the winter.

When running in summer, there is a lake to cross. Bears can't seem to resist playing with the canoes that were conveniently placed along the shore and it would require more than duct tape to keep them afloat, so forget the canoes. It would be best to wade across a shallow area in the first portage and then stay along the shore line to find the flagging tape marking the snowmobile route. It's not completely obvious.

There are quite a few plants not found along other Birch Brook trails. Along the lake shore, look for sweet gale, dwarf birch, and meadow rue. There are pitcher plants, sundew, and Horned Bladderworts (all insectivorous) in the bog, and water lilies in the lake. Along Colin's Heritage Trail, there are some large white spruce.

In the summer, expect to see bears. Moose and porcupine are also possibilities, and there are sometimes beavers and otters in the lake, as well as loons and ducks. In the winter, tracks in the snow indicate an abundance of wildlife but encounters are rare treats. 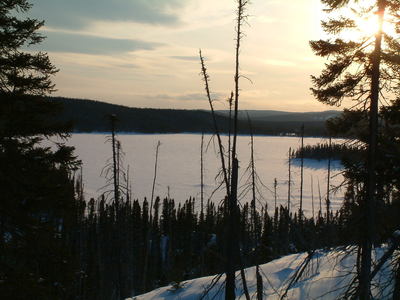 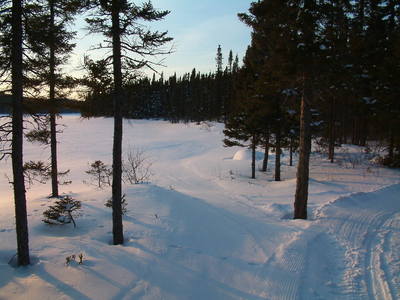 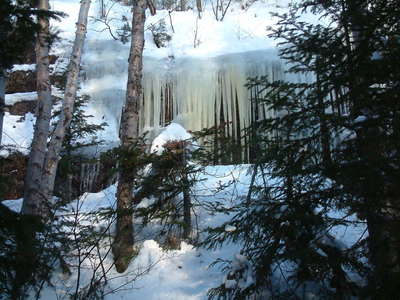 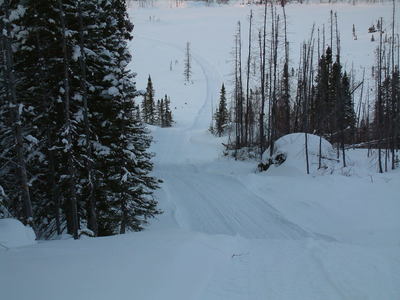 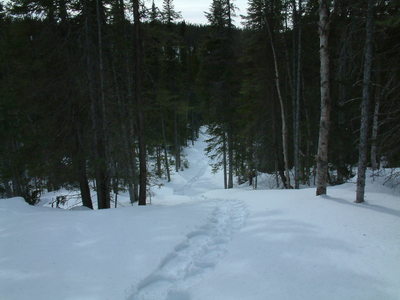 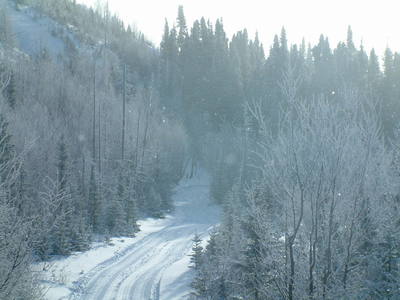