“A nice trail through woods by a lake. The southern section easy but the northern section is a little harder. ”

The trail can be muddy the day or two after a rain.

This trail is also open to mountain bikes, so stay alert while on the trail!

The southern section can be easily run, but the northern section would require much more attention to your footing.

This run can be done in either direction. The southern section (nearer the lake) is one of my favorite runs. The northern section (by the fields) is much less traveled and is a bit harder, with roots, small rocks, some mud and small elevation changes.

Start from the parking lot of the East Picnic Area, off Edinburg Road. From the lot turn left and head down the trail marked by the blue posts. The trail is well-maintained and has frequent blue blazes; it is generally easy and wide along this southern section. It does wind around some dead fall, so the path changes a little, but you can't get lost.

Cross two foot bridges and then bear to the right where you'll cross another creek (by footbridge). You'll eventually come to Lake Mercer, where you'll have nice views of the lake, and then the boathouse the crew teams use. Be courteous and run behind the boathouse so you don't interfere with the rowers. Follow the parking lot to the left, then turn up North Post Road. Go 500 feet or so past a marshy area and you'll see a rutted dirt access road on the right. This is the continuation of the Blue Trail.

The blazes are much less frequent from now on, although the trail is traveled enough to be unmistakable. However, the wide path is now gone and the trail is only one-person wide, and has many turns. It follows the contours of the fields south of Conover, but NOT in a straight line. There are several creek crossings, all but one via a footbridge; the one that doesn't have a bridge is tiny and shallow, so use the stepping stones or just jump over!

Part of the path is marked with old orange paint, but don't worry, this is the Blue Trail. After much winding back and forth, you'll eventually come to the access road for the power lines. You might be tempted to cut across Bridegroom Run by one of the "unmarked paths" noted on the trail map; however, these trails don't exist, and end in thorns and marsh. Stick by the power lines until it ends, then turn right on the street. Turn left on Darvel Drive and then right on Edinburg Road. Follow this to the picnic area entrance and the parking lot. 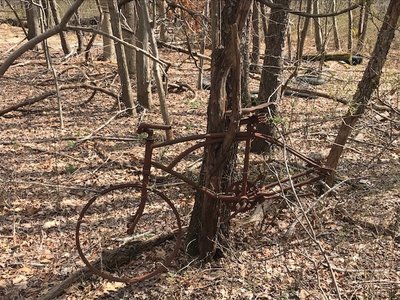 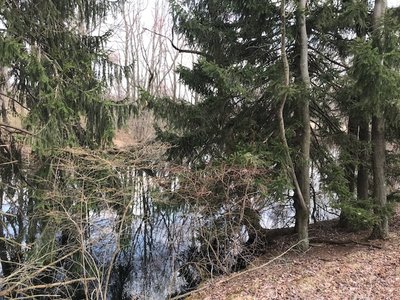 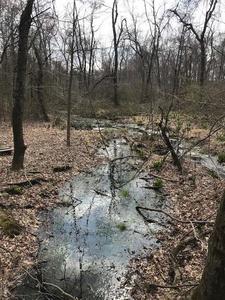 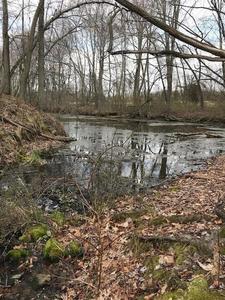 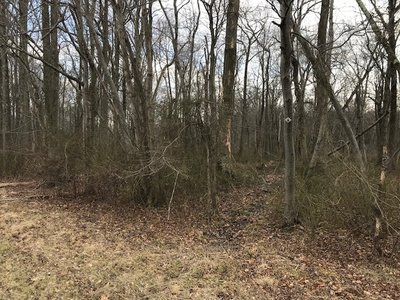 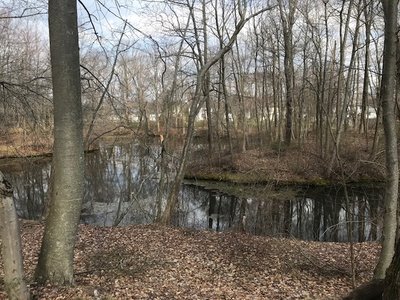