“A run along Titus Canyon Rd. from east to west from the NV side into Death Valley National Park. ”

The road is one-way, running from easy to west. If you want to run this with hopes of having some friends, go ahead with their vehicle and some tasty snacks and treats, that's fine, but keep in mind that they won't be able to turn around and pick you up if you fail, unless they loop around and go back from the start. Or you can run the organized race and know that aid stations are placed every 5 miles.

This event is run on a single road through Titus Canyon, starting in southwest NV and ending in Death Valley NP. There is roughly 2,400 feet of climbing in the first 12 miles and a steady descent for the remaining 14 miles, dropping 5,200 ft. from the high point!

This trail is actually a road, albeit rough and, maybe not needing high clearance, but definitely needing sturdy tires with decently rock-resistant sidewalls. Regular running shoes are fine, I guess gnarly trail runners would be better if you need that sort of thing. I ran this in Altra Superior 1.5's and felt fine. My next time around I'll likely have on my vivobarefoots or Xero Prio's. It's not bad, just a dirt road with some rocks and there are no big steps or drops or boulders or singletrack as it's a drive-able road after all.

But that scenery!!! when you get to the high pass at 12 miles, and you are just starting to think this whole thing is way too boring, the canyon opens up below you and your eyes will pop at how beautiful it is! If you're unsure about whether it's your thing, rent a jeep or take a mountain bike down the trail to scope things out, I'm positive you'll want to return and explore on foot.

This run begins with the usual scenery you might expect from the desert southwest: dirt, shrubs, small rocks, and lots of dust. Since you're probably going to begin this run early in the morning and sometime during late fall through early spring, you can expect COLD, dry desert air. Resist the urge to bundle up. When this race is officially run, it's usually the first weekend of December, and somewhere between 40 and 50 degrees as the sun is coming up. However, by the time you finish, it may be into the mid 70s or 80s depending on the season, so pants and long sleeves are not what you want. Wim Hof can get you ready for cold, but do you really want all that brown fat for running in the desert?! Suck it up and enjoy numb toes for the first hour, then you're fine.

The 2,400 feet of climbing over 12 miles is pretty gradual, but it's still 2,400 feet. If you live in the flat midwest, you better hit that stairstepper or get on a bike. And running downhill for 14 miles is not easy. Gravity helps, but you also need to put the brakes on often, and there are these things called rocks that just won't allow you to zone out and pound the ground the way you usually do. Toughen your legs. You should be doing downhill tempo runs to get ready for the beating, at high speed. Those calves need to be bullet proof.

It's a desert. Nothing but lizards and scorpions here, and maybe a starving coyote or emaciated runner.

There's a ghost town right in the middle of this run. It is pretty small but still interesting enough that you might want to just ditch the Strava KOM or PR marathon time to check it out. Supposedly, there is also a restroom (outhouse) at the ghost town, but I never saw it. Plenty of rocks and thirsty bushes around instead will gladly accept your aqueous donation. 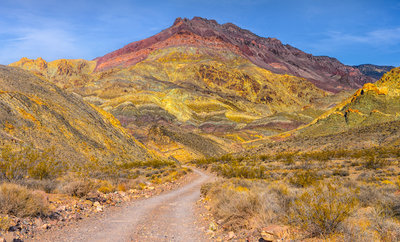 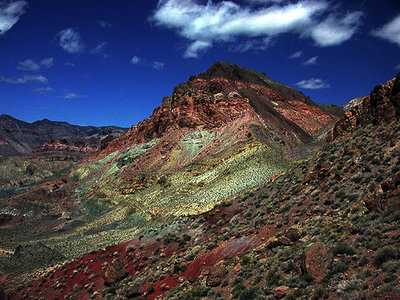