4.8 (8)
Plan with onX Backcountry
Previous Next

This section of the Pennsylvania Turnpike was abandoned in the late 60's. This run explores nearly eight miles of old roadway, including two tunnels that are accessible on foot or by bike.

DO NOT GO WITHOUT A LIGHT. Do not explore the side passages of the tunnels. Stay on the roadway as adjacent areas are still under PA Turnpike control.

This run explores a section of America's first long-distance, limited-access highway that was taken out of service in 1968 when the turnpike diverted over and around the mountains instead of through them. The old road has two dark, damp, and abandoned tunnels along 8 miles of history that is slowly reverting to nature. There are some gentle climbs and descents along the length of the trail. The tunnels are dark (in the longer tunnel, neither end is visible from the center) and offer not only a unique, chilling sensory experience but also a cold respite from the heat and exertion outside.

From the east side, it is a short run to the larger of the two tunnels: Sideling Hill Tunnel. This tunnel is approximately 1.3 miles long with a slight crest in the middle. At approximately 3.5 miles farther on (with some slight rolling hills along the way), runners will come to Ray's Hill Tunnel, which is about 0.5 miles long. The old roadway continues a bit until reaching the western access near US 30.

The trail is entirely on old turnpike roadbed. The pavement is broken in spots, but easily traveled. Inside the tunnels can be extremely dark and damp. Watch for broken concrete, drips from overhead, and trash (including glass) in the tunnels.

When the PA Turnpike first opened in the 1940's it had many tunnels. By the 60's, traffic congestion entering the tunnels was increasing. Many of the tunnels were twinned, but the two tunnels in this section were abandoned as the turnpike was rerouted around/over the hills. The two tunnels have since become part of the Southern Alleghenies Conservancy. The tunnels are open to recreational use, but the ventilation and maintenance tunnels are closed. 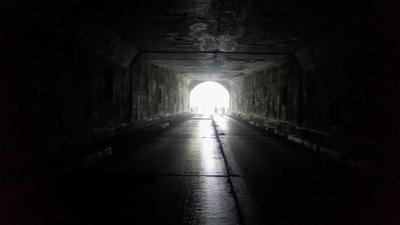 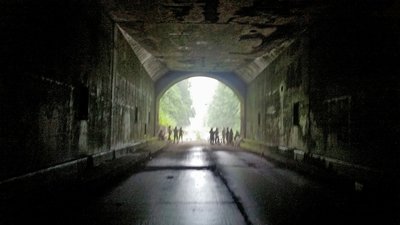