“A great run around an historic railroad grade and up to Inspiration Point. ”

A nice 11.3-mile run that uses the Lower Sam Merrill Trail 12W14.1 to reach the historic Mt. Lowe Railroad Tour, and then descends Castle Canyon Trail #12W28. Those with less energy or time can visit the ruins on Echo Mountain and return the same way.

Make sure you download or print off a free copy of the free e-book/brochure "Self Guided Hiking Tour of the Historic Mt. Lowe Pacific Electric Railway, Angeles National Forest" by the United States Forest Service! It will make your self-guided interpretive tour, much more enjoyable and informative.

There are no restrooms at the start of the trail or on Echo Mountain. The nearest restroom is at Farnsworth Park on Lake Ave., 3 blocks south of Loma Altra Dr. This is a very popular trail, and it can get very warm. Dogs often suffer due to heat and lack of water. Do not cut switchbacks which cause extensive trail damage.

This run makes for a long day but the views are worth it. There is not a lot of shade on this run, so make sure to plan accordingly and get an early start, so that you're heading down before the midday heat.

From the corner of Lake Avenue and Loma Alta Drive, pass through the iron gate of the Cobb Estate and go east about 0.1 miles to the start of the Lower Sam Merrill Trail 12W14.1. The trail descends and crosses a usually dry stream bed before climbing an easily manageable grade. The route passes through open chaparral of laurel sumac, sage, scrub oak and ceanothus with occasional shade from live oaks. It climbs for about 2.6 miles where it meets the Echo Mountain Trail 12W14.A which joins from the north (do not confuse it with with the Middle Sam Merrill Trail 12W14.2, the next left heading north, or Castle Canyon Trail #12W28, the third left junction heading north, all of which are within 0.1 miles).

Most runners come to visit the ruins of the old hotels and incline railway at the south end of the mountain. If this is your destination, you can find some nice shaded areas to take a break before returning back.

The first two stops are on Echo Mountain Trail 12W14.A, which thankfully climbs at a slightly lower grade than the Middle Sam Merrill Trail 12W14.2.

At 3.4 miles, the Echo Mountain Trail 12W14.A ends at the junction with Mt. Lowe Road #2N50 and the third stop on the tour. Turn right on the road which keeps climbing but each of the tour stops offer plenty of opportunities to rest. The road enters a shaded forest of oak and bigcone spruce after a long switchback. A great resting point is Mt. Lowe Trail Camp, near stop number 9, at about 6.2 miles. The campground has shade, water, restrooms and picnic tables.

Continue on Mt. Lowe Road #2N50 heading south and at the junction turn right to take Muir Peak Road #2N50.A 0.2 miles to Inspiration Point at 6.6 miles. There are many sighting scopes mounted up here which look out over Santa Monica, Hollywood, the Rose Bowl, and the rest of L.A.

Most of the route consists of open chaparral of scrub oak, ceanothus, laurel sumac, sage. There is some shade from live oaks on the lower trails and bigcone spruce along the upper part of the road and in Castle Canyon.

Watch out and avoid poison oak.

In the 1890s, Professor Thaddeus Sobieski Constantine Lowe (a famous rich guy) joined forces with David J. MacPherson (an engineer) to build a railway to, and a resort complex on top of, the San Gabriel Mountains. Passengers took a trolley car part way up Rubio Canyon, where they transferred to a cable-hoisted incline car that went to the summit of Echo Mountain. Here, the two built hotels, a power plant, gardens, residences, a small zoo, and other features of a small city.

Soon after Echo Mountain was built up, they began working on a railway extension to the top of Mt. Lowe, however money ran dry and the railway was never finished.

The whole rail system and resort area changed hands several times and in the early 1900s became immensely popular for a number of years, offering millions of visitors fine hotels to stay in and spectacular views of southern California. But in the 1930s, a fire destroyed the Alpine Tavern and hotel, and as a result of the depression it was not rebui 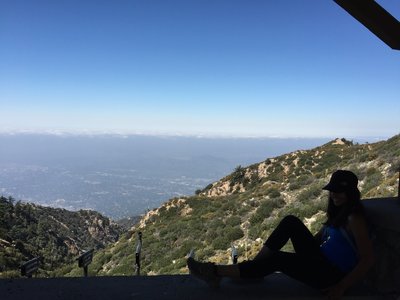 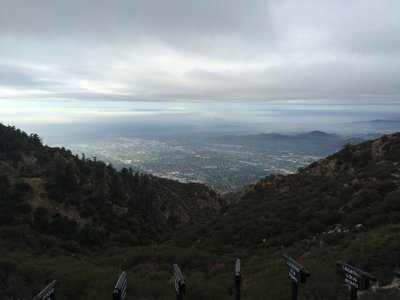 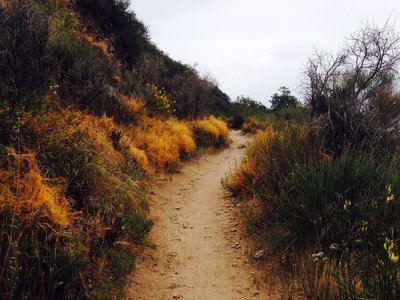 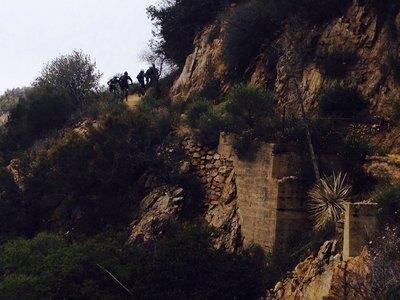 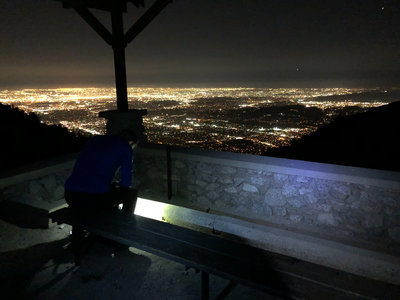 Sunset Ridge to Dawn Mine Loop