“A gorgeous, off-trail route through the Neota Wilderness on rough trails and animal paths to Iron Mountain. ”

There is a sign for State Forest State Park with a fee box, but according to my map, this route skirts the border of the park, staying in the Neota Wilderness so no fee is necessary - make sure to double check, though.

This would be a very difficult run as there is no definite trail.

This trip starts out nice and level on a road along the Michigan Ditch but quickly veers off of the road and into the backcountry, where it follows animal paths and natural features. Strictly sticking to the route on the approach to the couloir is not necessary.

Make sure you have the right couloir, there are three talus slopes on the west side of the finger. The first one leads into what looks to be a highly technical couloir. I have never ascended this route, but from looking up it, it is definitely a class 4 or class 5 route (hard to tell because it turns out of view). The second one is Lucy Couloir, it is notable for the large rocks near its top on the east side. The third slope is not a couloir, but just a big talus slide. When I was there, the color of the talus on the third slope was much lighter than Lucy Couloir. It is also much lighter.

Once you start up the scree/talus slope, the real fun begins. There are about 500 vertical feet of ascent to the ridge. Expect to knock loose a lot of scree as you ascend. The route that I found most effective was to move between the car-sized rocks that were exposed, as there is less scree behind them and the scree above them packs a bit tighter. After you've ascended about 200 vertical feet of scree, you'll reach some of the rock outcrops. If you stay closer to the walls of the couloir, you can use this rock to get off the scree. Make sure to check every hold before you put weight on it, as the rock is very rotten.

From the top of the couloir, this route is a simple ridge walk up to the summit of Iron Mountain. The summit is marked with a fairly large cairn, which has a summit register tucked into it in a plastic tube. Take in the view and get ready for the descent.

Descend to the saddle between Iron Mountain and Thunder Mountain via some more scree and talus. From the saddle, descend towards the Michigan Ditch road. My GPS had a road marked that I picked up, but it was a very old fire trail that didn't help me very much. In retrospect, I think I should have tried to descend directly to the real road. Depending on where you pick up the road, you may need to walk a bit to avoid the Michigan Ditch. You can wade across in many places if necessary, but be careful as it can be deceptively deep and swift. 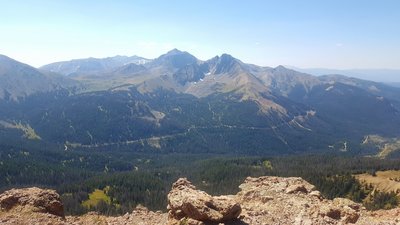 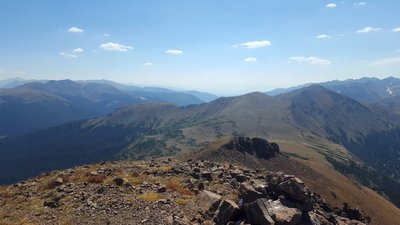 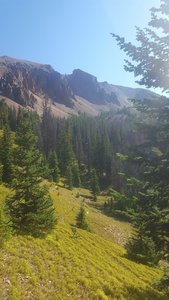