The Grand Parade Trail starts from the same parking lot as the Panorama Trail - Main Loop. It is a pleasant flat loop trail that is good for families and children.

Turn right at the main loop, which begins a short distance from the parking lot. The trail passes among pinyon pine and Utah juniper and smaller semi-desert plants such as sage, rabbitbrush, and Indian paintbrush. It mostly runs next to red-rock cliffs that are part of the Entrada layer, formed from sedimentary deposits laid down during the Jurassic Period. It passes both small and towering pipes, which are narrow towers of harder rock that were left behind as the surrounding softer rock eroded away.

The special feature of this trail is that it enters two box canyons. Box canyons have a single narrow entrance leading to a wide area that is completely surrounded by high cliffs. I was expecting something small, bounded by low red rock cliffs. Instead, I was astounded by their actual size. These are true box canyons surrounded by cliffs over 800 feet high. In both cases, the trail goes in a little ways to the main opening of the box. From there, it is possible to continue a short distance up little side canyons, but they quickly become impassible unless you are a rock climber.

Once you have exited the second box canyon, you have seen the primary features and it is only a short distance to a junction where you can either turn left to return back to the parking lot or turn right to go towards the Basin Campground or to connect to the Angel's Palace Trail. 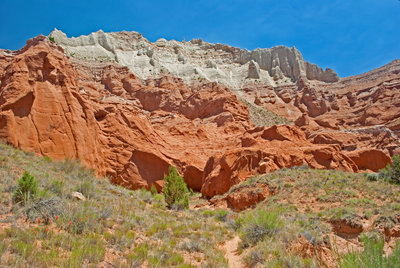 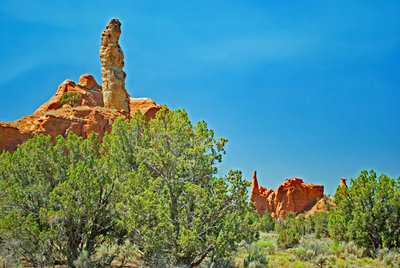