“Passes magnificent rock formations and goes down a canyon with high sandstone walls--possible side trip to Phipps Arch. ”

These creek beds are normally dry. There may not be any water until the Escalante River. Wilderness permits are not required.

There is no trail down Phipps Wash, but route finding and the run are not very difficult, except for the side trip to Phipps Arch. Compared to the route described by Michael Kelsey in "Canyon Hiking Guide to the Colorado Plateau", the route described here is easier, with less elevation change. It starts from a pullout on Hwy 12 about 11.5 miles east of Escalante, Utah where the highway crosses a dry tributary to Phipps Wash.

It is possible to run fairly directly down the tributary, leaving the creek bed only to get around places where it drops sharply. However, the exceptionally beautiful rock formations just above should not be missed. I recommend taking the slightly longer, scenic route down to Phipps Wash and then returning by the more direct route.

From Hwy 12, climb down the gently sloping rock to the creek-bed. At about 0.3 miles, there is an easy way to climb the red-rock slopes on the right side to hundreds of yards of undulating rock formations colored with light reds and oranges mixed with the deep green of trees and bushes. This is especially beautiful in the morning sun. These formations seem little known, but they are easily reached and worth a trip by themselves.

Explore the rocks as you head toward the left side of Hill 5840, which consists almost entirely of pink and orange rock. Run around to the back side of Hill 5840 where there are sweeping views of upper Phipps Basin and easy slopes down to the main Phipps Wash. When you first reach it, the wash has a sharp drop, but this is easily bypassed. A little farther down, you pass the mouth of the tributary that leads back to to Hwy 12. After that, simply follow the canyon all the way down to the Escalante River.

The middle part of Phipps Wash is fairly wide, with orange sandstone walls on both sides. As much as possible, avoid the deep sand in the center by running on firmer sand or rocks along the sides.

At around four miles, you reach a major side canyon on the right (east) side. On the far side of the canyon's mouth, there is a trail marked with cairns that leads up the slick rock to Phipps Arch. This trail has ledges and sections that are very steep, especially near the top.

On the return trip, at the mouth of the tributary leading to Hwy 12, avoid an impassible section just upstream by scrambling up the far (south) side of the mouth to the top of the canyon. Return to the creek bed where possible. When you see the two other impassible sections, simply run up the side around them. 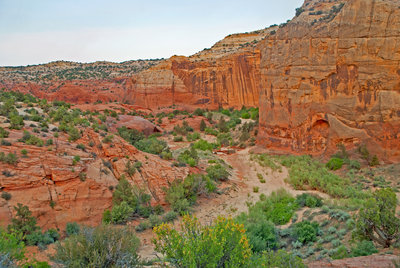