“One of the park's most accessible slot canyons, this route is as beautiful as it is easy to access. ”

Predominantly sandy going and a steep end make for some running resistance.

Across the road from the Headquarters parking area, the path leads south across the Halls Creek valley as it heads toward a large, brown, rounded Entrada outcrop. A steep-sided wash is crossed early on before reaching the left flank of the monolith.

Beyond the rock, the trail tops a low rise before heading into a wash with woody vegetation. It’s worth turning around and marking this point to aide on the return navigation. As you follow the wash, the ground is littered with rippled rock fragments.

At about three-quarters of a mile from the trailhead, the wash enters the Page Sandstone and a nice slot section is just a short distance ahead. The slot is deep, shoulder width wide, and stretches for a couple hundred feet. The way is sandy and easy going, likely making it the most accessible slot canyon in the park.

Beyond the slot, the canyon remains highly scenic as the walls soar far overhead in vertical sweeps, often adorned with veils of desert varnish. The floor is just wide enough to sustain a sandy channel with heavily vegetated banks.

Ahead, the canyon floor ends at a sandstone ramp that rises at a moderate gradient. A couple minutes of climbing leads to a small pour-off where the ramp itself is incised into the rock. This is the end of the trail. From this vantage, and during the return trip, the canyon’s aspect is quite different, but remains impressive.

In the spring, especially in mid- to late-April, Fremont barberry (Berberis fremontii) adds color and aroma to Headquarters Canyon. The compound leaves are like those of holly, with sharp points, though they are generally smaller and gray-green. Among the shrubs in Capitol Reef, the leaves are distinctive enough to identify Fremont barberry, but in the spring it can be recognized even when it can’t be seen. The aroma of the yellow flowers is pleasant to some and off putting to others.

Before the canyon narrows to the slot section, the wash is lush with piñons, juniper, single leaf ash, Indian rice grass, Mormon tea, cactus, Gambel oak, and Fremont barberry. Further along skunkbush, serviceberry, box elder, Apache plume, roundleaf buffaloberry, and snowberry join the mix. At one point, Gambel oaks growing from the banks arch over the wash, forming a tunnel. 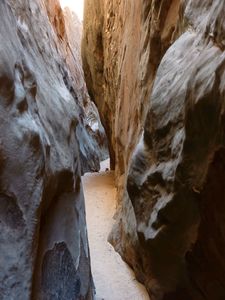