“Views, boulders, and rolling trail. No easy way to get here (thus the name), but one of the better Ashland trails. ”

Rarely closed, but occasional controlled burns and logging will keep visitors from accessing the area.

One of the flatter trails in the Ashland watershed, you have to climb several thousand feet just to get here. And, "flat" is a relative term; in Ashland, virtually no trail is flat, and this one is really rolling. You can get here via the Horn Gap Trail, FS Road 2060 or via FS Road 2060-400. From downtown or Lithia Park, this is going to be roughly 2500 feet of climbing. Still, once you're here, you'll be treated to immense granite boulders, large Ponderosas, great views of Mt. Ashland and the expanse of the Ashland watershed. Recent Ashland Forest Resiliency efforts have opened the views considerably.

The trail crosses 2060-400 several times but is signed well. It's hard to get truly lost unless you accidentally head west on some of the dirt roads or Ashland Mine Road. The popular Ostrich Peak is nearby, but on private land. Several other rogue trails connect near the northern end of No Candies, but are also primarily on private land, and it's best to avoid these.

This is a multi-use trail, so expect to see some cross-country mountain bikers.

Ponderosas. Bear and mountain lions. Luckily this trail is located at an elevation above the poison oak. 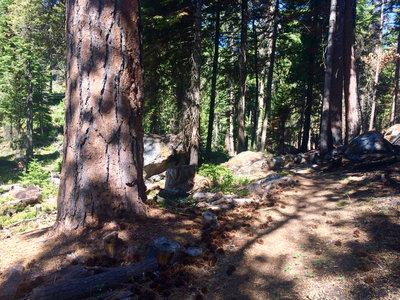