“The tallest waterfall in NJ followed by a glacial lake and one of the largest remaining hemlock groves in the Northeast. ”

This route highlights interesting running terrain while taking the wanderer to great destinations along the way. On this loop, you'll enjoy the tallest waterfall in New Jersey and climb up alongside it to two lookout platforms, run a portion of the AT, relax at a glacially formed lake that begs you to take a siesta, run through dying hemlock groves with a deep woods feel, and pass by several vista points with views of the surrounding Kittatinny Mountains.

The road to Buttermilk Falls Trail is closed in winters and the route coming from the west (Mountain Road) is not in the best of shape. Cars with abnormally low clearance should take the route from the east (the 206 side).

Start this great run with a long and winding car ride through dirt roads in the backwoods of the Delaware National Recreational Area. The trailhead is at the base of Buttermilk Falls and your payoff is immediate, although the flow does slow to a trickle in the drier months.

The run begins on the blue-blazed Buttermilk Falls Trail which takes you up the eastern flank of the river. This early section looks quite difficult on the elevation chart but don't be discouraged, as there are wooden steps with railings for the most difficult portions. The falls themselves are wonderful, topping out at 200 ft, the tallest in New Jersey, and are stunning on a sunny day with the sun's rays peeking through the forest canopy above.

The first 1.4 miles of trail are almost entirely uphill, climbing just under 1100 ft until reaching Appalachian Trail on the top of the ridge. Here, turn south (right) for just under a mile and pick up the Crater Lake Trail. This is a little tricky as there are no blazes on Crater Lake Trail and there are a few other unmarked trails in the area as well. You can loop around Crater Lake in either direction but I recommend clockwise as it breaks up the Appalachian Trail into two sections.

Crater Lake is the perfect lunch spot. At the south end near the parking lot (this lake is also accessible by car), you can relax on exposed bedrock near the shoreline. The lake itself was formed by a glacier millennia ago and is one of the most serene places in the area to visit.

The loop hooks back into the AT at the north end of the lake and bears left (north) onto the Orange Trail for 1/2 of a mile and then pick up the Blue Mountain Lake Trail (Outer Loop) for 1/3 of a mile. These two sections of trail cut a path through amazing groves of the soon to be extinct Hemlock Trees. Here, you can see the devastation of the Woody Adelgid with one grove almost completely devoid of needles.

Next bear right onto the Woods Road, which is more of a trail than a road, and follow 1 1/3 miles northeast until it intersects with Buttermilk Falls Trail. This section is pleasant running with the highlight being a swamp towards the beginning of the trail that is home to dozens of dead trees, standing in water until they ultimately fall in the near future. The scene is a bit spooky if you use your imagination.

Finally, head back down to the base of Buttermilk Falls, being careful not to slide down the mountain. It's almost as difficult going down the steep incline as it was going up, but well worth your time and effort.

Northern NJ Hardwoods, some wildflowers, hemlock groves - also saw a great blue heron and there are deer in the area.

From the National Park Service: Crater Lake is glacial lake left behind after the Wisconsin Glacier retreated from this area about twenty-two thousand years ago. This beautiful setting attracted developers and in the mid-1900s, this was a budding vacation community. Runners may spot remnants of old abandoned buildings along several trails. 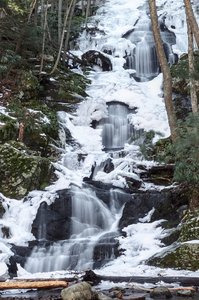 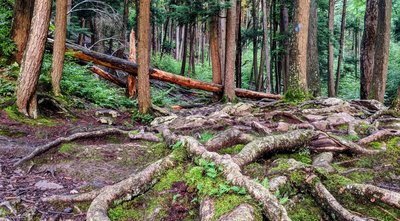 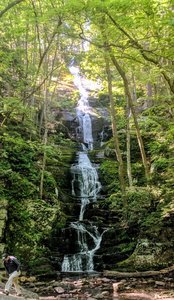 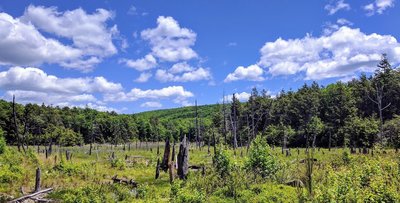