“A solid run with a good mix of open space and tree cover, single and doubletrack trail, and a couple of scenic views. ”

Motor vehicle access for the beginning portion of the trail is closed during significant snow and high runoff times and is subsequently open during good weather and trail conditions.

There is no motor vehicle access once down at the creek and for the remainder of the trail.

There is a nice viewpoint about two miles in, at the top of the vertical portion. There is an open area for picnicking etc. where the trail meets Gold Hill Road.

*Mountain Biking, Cross Country Skiing, and Horseback are allowed on the entirety of the trail*
*Be aware shooting is allowed (if no fire ban)*
*Camping is only allowed on certain portions of the trail (adhere to the National Forest Service signs)*
*If you plan on going off trail, be aware there is private property in surrounding areas*

There are a few downed trees throughout the trail. Trail commonly has muddy or flooded portions.

During this part of the trail there will be several forks, don't panic. Most of the cutoffs have National Forest markers saying 328A or 328B, just follow the ones that only say 328 until you get to 328D, which will be your trail. If for whatever reason the signs are missing or you are having trouble, stay to the westernmost trail (trail left). After this initial part of the trail, you'll see a yellow and red sign that says motor vehicle use is not permitted beyond this point and the trail will become a singletrack. Once you are on this portion of the trail, there will be no more cutoffs.

running along the creek is very pleasant, as there is a good mixture of tree cover, vegetation, and sunlight. The initial vertical portion of the run begins right after it breaks away from the creek. To the west (trail right), at the top of the initial vertical portion, there will be a pretty obvious clearing (a few hundred feet of no trees and low vegetation). If you go there, there will be a pretty awesome 360° view, and a clear shot down to North Boulder and the foothills. Once further along the trail, you'll reach a permanent road closure sign and a large clearing. This is the end of the run, but is a nice area to make a campfire (if there is not a fire ban) and have lunch.

If you wish to start the run from Gold Hill Rd, there is a dirt turnoff to the clearing and it will be relatively obvious because it is the only significant clearing (if coming from the east).

There's a significant amount of wild roses, especially as you make your way along the side of the creek, so be careful not to get pricked.

I've seen a few foxes, hawks, woodpeckers, and deer. I have also seen moose tracks and bear scat along the trail. 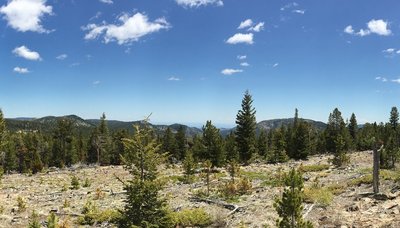 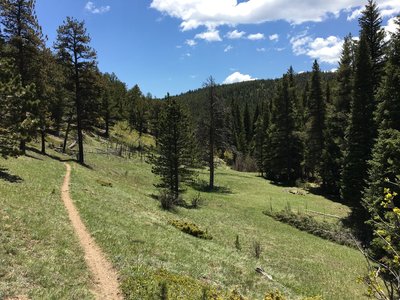